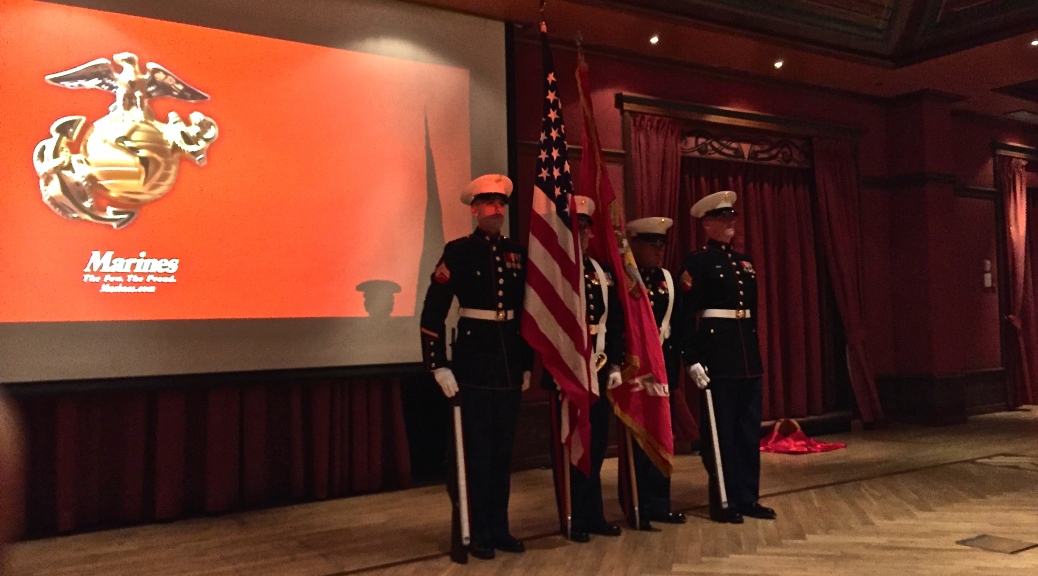 November 10, 2015.  I’ll confess that I don’t know much about American Military parades, tattoos, or traditions.  I’m guessing that such rituals are more familiar to those with family members who’ve served in the armed forces.  For example, did you know that the U.S. Marine Corps celebrates the anniversary of its founding each year with a Birthday Ball — tuxedos and gowns required?  News to me, too.  But this year, Matthew and I were lucky enough to attend the birthday bash held by the Marine Security Guard Detachment in Oslo, and boy was it a party.

One of our team members is an ex-marine, who invited us all to attend with him.  Matthew and I were thrilled and honored, of course, but a bit concerned about how to dress appropriately, since we’d inconveniently left our formal evening wear at home.  I’m joking.  We have none.  Unless you count my wedding dress or the ancient tailcoat Matthew occasionally dons as part of his “Two-headed Man from the Carnie Freak Show” Halloween costume.  (Rounding out the entourage, I go as the Strong Man, and our friend Mike goes as the Bearded Lady.)

To our surprise, we discovered that tux rental stores are thin upon the ground in Norway.  Most men buy a tuxedo and have it tailored to fit like a second skin.  So our first order of business was traipsing out to the swanky store Tiger of Sweden (grrrr!) to find Matthew some proper attire.  We went the whole nine yards — a shawl-collar jacket, pants with a satin stripe, patent-leather shoes, a pocket square, silk socks, a real bow tie, etc.  After all, if you’re going to go, you might as well go big.

Next, we went shopping for something classy but not “mother-of-the-bride” for me.  This proved to be a more difficult task.  We discovered that only bridal shops and a few other small chain stores carry dresses suitable for a ball.  After searching through them all, I came to the conclusion that, while Norwegians are typically some of the sharpest dressers I know, the ladies apparently like to hootchie it up a bit when it comes to formal wear.

Most dresses strutted sequins, rhinestones, tulle, feathers, sheer mesh panels, thigh-high slits, crinolines, and day-glo colors so bright that they made my eyes hurt.  While these bedazzlements might be fine for a beauty competition, cotillion, or Quinceañera, they seemed a bit too flashy for an occasion that called for more restraint.

In fact, when I googled the appropriate attire for the Marine Corps Ball, I found a Powerpoint tutorial specifically listing many of these embellishments as “Fashion Don’ts.”  (Seriously, the video also advised against big hair, runway makeup, and tiaras, cautioning girls that pageant wear was not acceptable.  The instructional section for men merely reminded them to shower and use deodorant.  Hmmm.)

In any case, at the posh boutique Coast, I finally found an elegant white blouse piped with black satin and bedecked with only a moderate bit of bling.  The accompanying black satin skirt possessed a fishtail hem that flaunted a train.  I just couldn’t resist that train, having last worn one decades ago on my wedding day.  But at the tailor, even in my highest heels, I had to cut off and hem 10 inches of material along the bottom to avoid looking like, “Honey, I shrunk my prom date.”

By selecting that train, however, I’d violated one of the Marine Corps Ball’s Powerpoint edicts and later discovered the truth of its warning.  Yes, it is awkward spending the evening politely asking people if they might consider removing their foot from the hem of your gown.  It’s even more embarrassing when you don’t realize someone is standing on your train, and you walk away, only to be yanked backwards like a dog on a leash.  Oh well.  Live and learn.  At least the train looked cool in pictures.

The night of ball arrived, and Matthew and I scurried about getting our outfits assembled for the soiree.  Despite watching a half-hour online tutorial about how to wrangle a real bow-tie, Matthew still felt he looked more “Kentucky Colonel” than “James Bond.”  I myself suddenly realized that, with my black-n-white theme — including furry wrap and elbow length gloves — I was definitely channeling “Cruella DeVille.”  (Someone at the event later kindly remarked upon the likeness.  Awesome.)

We opted for taking a taxi to the event (since wrestling a ball gown on the Trikk seemed silly), and arrived at the gorgeous Holmenkollen Scandic Hotel to find it wreathed in glowing fog.  An old “Dragon Style” structure built in 1894, it sits next to the famous Holmenkollen Ski Jump, the site for many of Oslo’s downhill, cross-country, and biathalon skiing competitions.  I highly recommend the hotel even just for a quick bite at the lobby cafe, as the atmosphere and view can’t be beat.

The event kicked off with cocktails at the bar, then we headed into the ballroom, which had a beautifully painted and carved wooden ceiling.  Adding to the festive color were American and Norwegian service men and women in a variety of formal military uniforms.  The ex-marines in our group gave us a quick lesson on how to distinguish rank and file and explained the meaning behind the various uniform details.  I wanted so badly to take pictures, but it seemed a little too “paparazzi,” so I behaved myself.

The hotel lobby and cocktail area has a huge snowflake sculpture made of metal covered with real frost (behind me).

Check out the lovely ballroom ceiling.

The pretty table settings, complete with a commemorative “Bloodaxe” mug. (Each year, the guards get to pick a mug motif, so this year they went Norwegian.)

A table draped in black with a single place setting honors Marines killed or missing in action.

After everyone found their seats, the Marine Color Guard opened the commencement ceremony, which began with a welcome from the new American Chargé d’Affaires to Norway, James DeHart.  Next, Retired Lieutenant Colonel Brian Bach delivered a moving speech and read a message from Secretary of State, John Kerry.  Via video, the Commandant of the Marine Corps provided a brief and heart-tugging history of the Corps and thanked the men and women for their service.

Then came the final portion of the program involving the actual birthday cake.  Four officers rolled in a trolley bearing the enormous chocolate confection.  As tradition dictates, the oldest and the youngest Marine each cut a slice, and everyone shared a champagne toast to the Marine Corps’ 240th birthday.  Truly, the whole ceremony was quite touching, and I feel really privileged to have been a guest.

A delicious dinner followed, then we all headed for the dance floor.  Only one problem:  our group of 16 included just two women.  Some of our guys politely asked a few of the ladies at other tables to dance, but no such luck.  Despite their resplendent uniforms, even many of the officers weren’t able to lure their dates onto the floor.  Most of the ladies were Norwegian, so perhaps they were a bit shy about “shaking their thang” while wearing ball gowns.

To be fair, in our enthusiasm, our group may have scared everyone else away.  We formed a dance circle where each person got to strut their stuff, pulling out old time-worn favorites like “the worm,” “running man,” “Blues Brothers,” and other moves not easy to execute in a tux.  Our host himself surprised everyone with his display of dexterity, and hence will now forever be known as “Mr. Rubber Legs.”

The evening crescendoed when our group took over the DJ’s board and began spinning their own tunes.  Everything kind of came to a screeching halt, though, when someone who’d had perhaps a smidge too much to drink rather unwisely put on the theme from “Top Gun” (U.S. Air Force).  A Marine rapidly stepped forward to reclaim control, and we decided to retire for the night before we all got placed on a military watchlist.

It’s always amusing to sandwich the shortest person in the room between the tallest.

One thought on “The Marine Corps Ball”