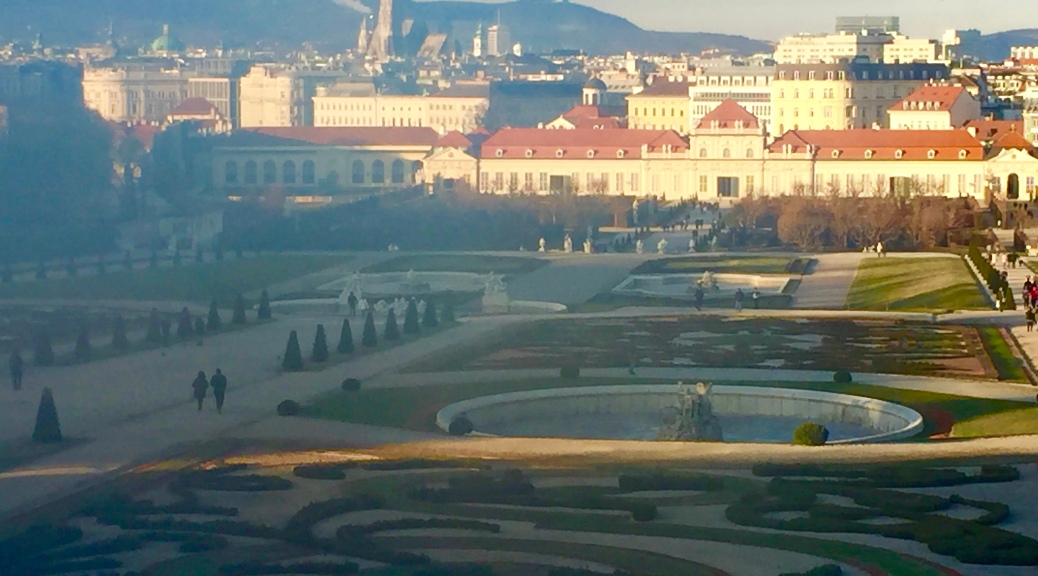 December 29, 2015.  Trying to see all the incredible museums that Vienna has to offer in just five days would be like enduring finals week in college.  You’d have to chug countless gallons of coffee and NoDoz in order to banish sleep and cram everything in … and then you’d forget it all in less than a month.  That’s why Matthew and I decided to opt for a more sensible learning lifestyle by selecting just a few choice museums — some of the less-frequented ones — to visit during our short stay.

The Museum of Applied Arts (Museum für Angewandte Kunst)
Matthew and I are big fans of furniture design and decorative arts in general, so we made a beeline for the MAK on our first full day in Vienna.  As the city’s answer to London’s Victoria & Albert Museum, the MAK houses a fabulous collection of pieces from Vienna’s artistic Golden Age.   But the museum doesn’t display objects in the stereotypical “cabinet of curiosities” style, where odd items get jumbled together in a case purely because they share a historical era.  Instead, the  MAK curates themes thoughtfully and with considerable artistic flair, creating vignettes that help support the design storyline.

For example, a group of Art Nouveau bentwood chairs sits peep-show style behind backlit screens that allow the sinuous silhouettes to speak for themselves. Persian rugs stretched on tensile wires defy gravity, becoming “flying carpets” that wrap around the room like a silkworm’s cocoon.  Statues of Asian deities nestle in nooks that are chiseled right into the building’s brick walls, just as they might be back home. Entire rooms from palaces and private homes have been moved into the museum to provide context for objects from a particular period.  Even if you’re not into interior decor, I think the MAK is well worth an hour or two, just to get a feel for how people once lived. 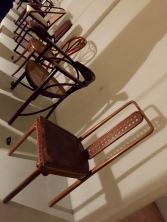 The showgirls strut their stuff backstage.

Hard to believe the museum allowed someone to chisel directly into the wall to display these figures. I particularly love that the labels are hand-written, which gives text the organic look of Asian calligraphy. It’s little touches like this that make the exhibits feel fresh rather than dusty.

The porcelain room from the Palais Dubsky in Brno has been moved in its entirety into the MAK. It demonstrates the 17th-century craze for porcelain. 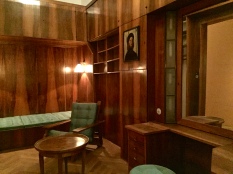 A sleek Modernist bedroom around the turn of the 20th century — I think this one might have been designed by Josef Hoffmann (can’t remember for certain). But it’s easy to see how “Mid-century Modern” from the 1950s got it’s start.

The interior of the museum is gorgeous, with Pompeian-style friezes and ceiling frescos. Here, two pieces by Stephan Sagmeister from his exhibition “The Happy Show” bring a bit of whimsy to the main lobby.

The Belvedere Palace (Schloss Belvedere)
One of the things I admire most about Vienna’s museums is that the buildings themselves are as beautiful as their contents.  The Belvedere is no exception, designed as two interconnected palaces for Prince Eugene of Savoy — the guy who drove the Ottomans out of Vienna and got rich in the process.  While Matthew and I had planned to visit the Belvedere for its collection of works by Klimt and Schiele, we were bowled over by the palaces themselves.  Every room was more breathtaking than the last, and as a result, we had to drag ourselves off to the exhibition that we’d originally come to see before the museum closed.

Entitled Klimt, Schiele, Kokoschka, and the Women, the exhibition explored the status and sexuality of women in the early 20th century as seen through the eyes of these artists.   While their style was indeed groundbreaking for its time, many of their depictions of women were quite disturbing.  Sometimes it felt like a show about sex trafficking.  Quotations and audio stations featuring backstories of the artists’ models (usually their wives and lovers) painfully illuminated women’s struggles for independence and the right to vote.  Frankly, I found the show depressing.  Not much has changed in 100 years.  Sexual exploitation and domestic abuse is still rampant.  And sadly, many young girls today still hold to the belief that marriage to a wealthy man is the only path to security and purpose in life.  And on that light note, on to another museum….

Prince Eugene’s Upper Belvedere Palace gave him the opportunity to look down on the Hapsburgs, both literally and figuratively, since their palace sits at a lower elevation and isn’t nearly so elaborate.

I loved this Atlas-columned entryway (called the Sala Terrena), which housed a funky sculpture made out of what appeared to be fluorescent light tubes.

I think this was the Marble Hall in the Upper Belvedere Palace. Matthew is contemplating whether he can recreate the effect at home.

The “Gold Cabinet” room in the Lower Belvedere Palace. Its plastered with porcelain figurines, emphasizing how popular this trend was in the 1700s.

This elderly man, his body stooped and his fingers gnarled and twisted by arthritis, stood or sat in several of the Klimt galleries making wonderful studies of the paintings. Gives me hope that skills don’t always fade with age.

The Lower Belvedere Marble Gallery once held four sculptures from ancient Greece and Rome. The originals have now been moved to another museum, and these are copies. 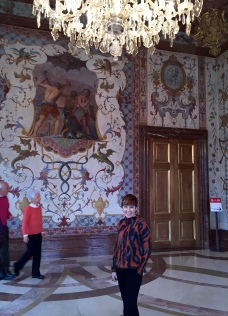 The Hall of Grotesques (note the serpentine figures done in true Pompeian style) in the Lower Belvedere Palace.

No photos were allowed in the exhibition, but I did manage to snap a shot of Klimt’s “The Kiss” in an adjacent gallery.

The Hofburg Treasury (Weitliche und Geistliche Schatzkamme)
The Hofburg Palace — home to the Hapsburg dynasty for centuries — is immense, housing the Treasury, the Imperial Apartments, the Spanish Riding School, the Austrian president’s headquarters, governmental offices, the New Palace Museum, and at least four other museums.  (Whew!)  Needless to say, with such limited time, we decided to concentrate on the Treasury, which contains the best royal regalia in Europe.

After viewing all 21 rooms  — although I may have skimped on the last few because a “museum coma” threatened (how many gem-encrusted reliquaries can you endure, after all?) — I can now confirm that it’s true.  The Tower of London’s goodies ain’t got nothin’ on the insane amount of jewels stashed in the Hapsburg’s vaults.  But the best parts of touring the Treasury were the random bits of personal flotsam, such as Napoleon’s son’s cradle, some christening gowns of Hapsburg babies, an agate bowl once believed to have been the “Holy Grail,” and Charlemagne’s saber and coronation regalia.  Check out the pantry of precious royal possessions below.

“Charlemagne’s Crown” has eight sides symbolizing the eight gates to Jerusalem. Seed pearls on this side of the arch read: Romanoru (M) Imperator Aug(ustus), “Emperor of the Romans (and) Augustus.” On the other side it says: Chuonradus Dei Gratia” Conrad, by the Grace of God.” (Conrad was the ruler after Otto.) The little cloisonné guy is King Solomon, who symbolizes royal wisdom.

These items are thought to have once belonged to Charlemagne, who in 774 officially founded what was later called the Holy Roman Empire. (The title was an attempt to claim that the Emperor had inherited an unbroken line of power from the Caesars.) Consider the HRE an ancient predecessor to today’s European Union. It consisted of several kingdoms ruled by princes, dukes, etc. who elected a leader from among their group. The leader (later called Emperor) had limited power, and the kingdoms retained their independence. However, they owed their allegiance to the Emperor, who helped facilitate order and trade between kingdoms. Pictured are the Book of Gospels used during Charlemagne’s “swearing in,” his saber, and the reliquary of St. Stephen.

The Imperial Crown of Austria was originally made for Rudolph II (1602) as his “personal crown.” Since the coronation regalia couldn’t leave the then-capital city of Nürnberg, Rudolf wore this one when traveling and on his days off from official duties as Holy Roman Emperor. But lest anyone forget who he was, the crown merges a bishop’s miter (to symbolize Rudolph’s divine authority) and a Roman emperor’s helmet (to symbolize his role as successor to the empire that fell in A.D. 476.)

Called the “Alba” for its white color, this coronation robe dates to the 13th century on the outside. However, tests have shown that it covers older garments layered inside. One of these may date back to the 9th century — perhaps during the reign of Charlemagne.

There are several versions of the “Holy Lance.” This one was crafted in the 7th century to hold a “true nail from Jesus’s cross.” During the 3rd century, Helena, mother of Constantine the Great, supposedly brought this nail back from her travels to Jerusalem. Testing in 2003 revealed that the nail dates from the 1st century A.D. and is consistent with Roman nails used in Jerusalem at the time of the crucifixion. The 14th-century gold wrapper contains the inscription: Lancea et clavus Domini (Lance and nail of the Lord).

When Josephine couldn’t produce an heir, Napoleon divorced her and married a Hapsburg, who bore him a son. The baby was bestowed the title of King of Rome, and this was his official “throne-cradle.”

The largest cut emerald in the world, this Hapsburg gem weighs a whopping 2,680 carats. Emeralds are incredibly weak stones that shatter easily, so the stonecutter erred on the side of safety and left it roughcut.

Captured in 1204 during the battle for Constantinople, this agate bowl was believed to be the “Holy Grail.” Natural veins in the stone are said to form the letters XRISTO (Christ) at the bottom of the bowl. (I couldn’t see it.)

One of two legendary “unicorn horns” owned by the Hapsburgs, this one is actually probably a narwhal horn. It and the “Holy Grail” were considered “inalienable heirlooms of the house of Austria” and couldn’t be sold for ready cash if the King’s funds ran low.

Almost 900 years old, the coronation mantle of the Holy Roman Emperor has lots of oriental motifs like camels, palm trees, and lions. Crusaders brought it back from the East. Its Arabic inscription wishes the wearer “great wealth, gifts, and pleasure.”

Now that you’ve enjoyed the Treasury’s feast for the eyes, stayed tuned for my next post about Vienna’s delicious dishes for the belly ….