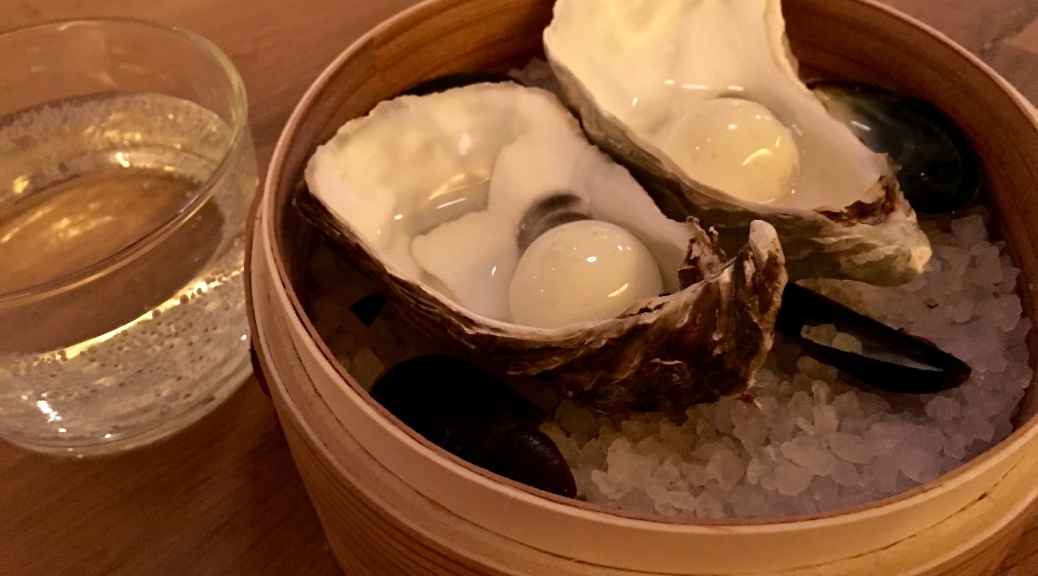 May 27, 2016.  So I’ve never before devoted an entire post to an eatery.  I’m no restaurant critic, and I can’t claim to have a Cordon Bleu-educated palate like many true foodies.  But Matthew and I enjoyed such a delicious and interactive dinner at Bokbacka that I had to share it with you.  Keep the place in mind if you decide to pay a visit to Oslo and are looking for a unique dining experience that’s a little off the beaten path (meaning it’s on a side street in our little Frogner neighborhood.)

Let me preface this tale with a few rather entertaining side stories.  First, a warning about most restaurants in Oslo:  Always make a reservation in advance.  It’s painfully difficult to get a meal without one.  Doesn’t matter if it’s a Michelin-starred bistro or TGI Fridays.  I can’t tell you how many times we’ve walked into an echoingly empty café, only to be turned away at the door because “they’re all booked up.”

No, we’re not being rejected because we’re notoriously bad tippers. (We’re not, by the way.  Just like any true American, we overtip.)  It’s because, in Norway, eateries frequently hold reservations for three hours.  A place can look absolutely abandoned, when it’s merely that patrons are incredibly late for their scheduled meal.  I honestly have no idea how folks stay in business this way.

Oh, and about TGIF.  It’s kinda surprising  when I ask Norwegians to advise me on a good place to eat.  You’d be amazed how many exclaim, “Have you tried TGI Fridays?  It’s terrific!”  In the heart of Oslo alone, there are three of these franchises within blocks of each other, and the line of locals awaiting an escort to their table stretches out the door.  Norwegians usually reserve restaurant dining for special occasions due to the cost, so I’m guessing (hoping) that the chain’s popularity has more to do with big, low-budget meals and cheap booze than anything else.

But don’t let this momentary lapse in gastronomical judgment convince you that Norwegians have plebeian tastes.  With all their wealth, they’ve acquired extremely sophisticated palates and have even helped to lead the way in the “forest foraging” trend.  If you haven’t heard of this concept, it involves hiking into the wild for natural ingredients — including herbs, mushrooms, berries, and greens — in a field-to-table movement that has become quite popular across Scandinavia.

And when it comes to wine, the average Norwegian could probably shame most any American sommelier.   Most locals display a virtually encyclopedic knowledge of varietals, vintages, vintners, etc.  I’d say it’s almost a matter of national pride, a bit like cross-country skiing.  At practically every dinner party we’ve attended, guests have spent at least an hour debating potential wine pairings with each plate.  I just nod my head a lot and try not to let my eyes glaze over, since I’ve neither the budget nor the cast-iron belly to authoritatively participate in these discussions.

One more thing about wine.  We’ve been to a few tastings here and in other European countries, and most every vendor we’ve spoken with talks about how many distributors reserve their finest for the Vinmonopolets.  It seems Norwegians have become known for being prime connoisseurs and consumers of high-end vintages.  Probably not only because they’ve got oil money to burn, but also because they have ample opportunities for sampling, sharing, and showing off, since mass quantities of alcohol are crucial to the success of any social event in Norway.

But back to Bokbacka.  Due to our crazy work schedules, it can be quite hard for us to keep a restaurant reservation.  Instead, we tend to drop in super early on a weekend, well before the 7:00 p.m. launch of dinnertime appointments.  Sometimes a host can manage to squeeze us in upon our promise that we’ll finish eating before the first reservation is scheduled.  We’d tried this method a couple of times at Bokbacka with no luck.  But one night, the foodie gods smiled upon us, and the maître d’ found us a space along the preparation counter — which turned out to be the perfect spot for watching the chefs at work.

We took a quick spin about the place and admired its woodsy, mid-century-modern air, a look that’s quite popular right now.  And I tripped downstairs to check out the bathrooms, where a forested photo mural continued the retro 70’s au naturale theme.  Clever accoutrement such as piped-in birdsong and garden-urn sinks enhanced the feel of being outdoors and made me wonder where the spa entrance might be concealed.  The host also invited me to check out the restful kitchen garden, which was set in an open atrium area.  Here, another door led into the offshoot coffee shop, just chocablock with grandma furniture that beckoned us to grab a cuppa and sit down for a chat.

Eventually, we bellied up to the bar, where we were presented with a wax-sealed menu tucked into a place-card holder artfully made from a piece of bone.  While we perused the options, the chef plopped two flasks on the bar — one labeled “Lemon” and the other “Wildflower” — and asked us which flavor we’d like to set the tone for the evening.  Of course we picked both.  And within moments, two small dollops of “molecular ice” arrived in front of us.  The chef quickly mixed a few drops of each elixir into separate bowls … and voilà, delicately nuanced Slurpees that would put 7-11 and ICEE out of business.

Digging into our slushies, we had plenty of time to debate the menu options and finally decided on the full, six-course, prix fixe meal ($90/pp) entitled Omakase, which in Japanese translates as “trust the chef.”  In fact, Bokbacka advertises itself as Nordic izakaya, meaning an informal place to drink and dine.  Why the emphasis on Japanese, you ask?  Pairing the two cuisines together seems to be a big theme here in Norway.  It makes sense, as we’ve noticed that both cultures share certain affinities, from enjoying raw fish to enduring unnecessary hardship purely to avoid the appearance of “being soft.”

The Japanese references continued when the first dish arrived — a Bonsai surrounded by a miniature garden of edibles.  Called, “The Tree:  Grass, Soil & Lichen,” the dish contained a base of oniony cream cheese sprinkled with crispy rye bread crumbs (soil), from which sprouted tiny radishes, mushrooms, tomatoes, and sprouts (grass).  All were liberally littered with tasty tumbleweeds of fried Reindeer Moss (which is actually a lichen).  So how did we manage to shovel all that eye-catching and earthy goodness into our gaping mouths?  By using the itty bitty spade provided, of course.

Next up, a pork tartar arrived snuggled beneath a bed of nasturtium leaves and wild tarragon.  Three dried egg yolks nested in a bowl of warm rocks accompanied the presentation.  We eyed the whole thing rather suspiciously, not knowing quite what to do.  The chef came to our rescue with a tiny grater and proceeded to shred the yolk atop the entire concoction.  The peppery bite of the herbs, plus the sunshine slivers of yolks, proved to be the perfect complement to the meat — who knew raw pork could taste so good? 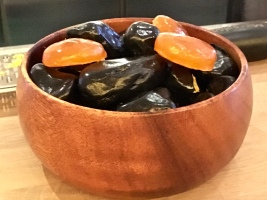 The egg yolks arrived cooked and dried atop a bed of hot rocks — very Japanese. 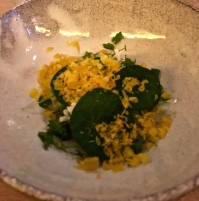 The final melange proved light and tangy, and left me wanting more.

Soon, two piping-hot, beer-bread rolls arrived in their own little grain-filled crock.  While we set about hungrily spreading a side of nut brown butter over the steaming buns, we chatted with our chef, who gave us some insight into restaurant life.  He told us about his schooling in England and France, followed by his internship in Portugal, where he worked 20-hour days, seven days a week, for months.  When we asked him how he liked transitioning to chilly Norway, he replied, “It’s great!  Chefs here can actually have a life.  They’re paid a living wage and work more normal hours, which leads to a much healthier lifestyle.”  Having just watched Burnt, a movie highlighting the drug-fueled, hard-knock life of a celebrated chef, I understood what he meant.  And I don’t feel so bad about paying high prices for food in Norway, when it means the artists who create these meals aren’t worked like slaves.

While I mused about the quality of life for those in the culinary field, the chef began to construct our next dish.  First, a piece of pollock appeared coated with what I think was a layer of ground spruce needles.  Over this, he ladled a buttery pesto that included ramsons, a kind of wild garlic.  The subtly piney, onion-tinged flavors perfectly complemented the fish, making me wish we’d ordered a double portion.

But I’m glad we saved room for the “Picnic at Kåseberga.”  Our chef explained that the owner of the restaurant modeled the dish on his favorite childhood memories, which involved packing lunches from a beloved, smoked-fish place near his family’s summer home in Kåseberga, Sweden.  Like a do-it-yourself dinner, a wooden tray held all the elements necessary for creating your own smørbrod sammie:  rye bread, onions, aioli waiting to be hand mixed, and the most delicious smoked-and-cured trout I have ever tasted in my entire life. 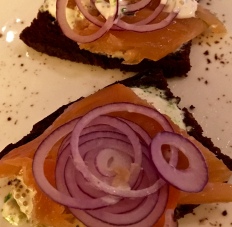 Assembling our own sammies made the meal fun and casual. It deflated any hint of the hoity-toity stuffiness that I typically associate with fine dining. 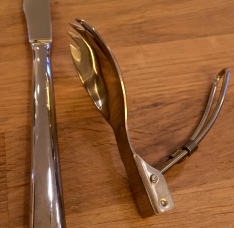 A Swiss Army version of a spork punctuated the picnic feel of the meal.

But wait, there’s more — and something not listed on the menu.  Before the next course, the chef delivered a tiny steamer basket.  Removing the lid with a flourish, he revealed what appeared to be two oysters filled with giant pearls.  You guessed it.  A sorbet palate cleanser, but surprisingly G&T flavored.  Lemon yogurt had been formed into balls kept corralled inside a gin-flavored gelatin coating that floated in tonic water.  Creatively refreshing!

The last of the meat courses for the evening included Urfe beef, which comes from an ancient breed of Norwegian red cattle.   Known as “little cows with the taste of the wild,” Norwegian Reds graze in the mountains and are raised primarily for their dairy production, but also for their tender beef.  Prettily plated, the meat came topped with white asparagus and herbs, onto which the chef dabbed frothed lard.  Much lighter than I expected, the dish was the perfect topper to the evening.

But I’d forgotten about dessert.  Despite my earlier wish for bigger portions of every dish, by the time the chef presented a plate of brown-cheese ice cream, dark berries, and wafer-thin malt crisps, I almost tapped out.  And then the coffee came … along with fabulous little fløtteboller (“cream balls” — we’d call them chocolate-coated marshmallow puffs in America.)  Needless to say, Bokbacka’s were moan-inducingly delicious and light years away from the chemical-flavored, processed version we have back home.

So if you’re looking for a well-rounded dining experience that includes wonderful service, an art-gallery atmosphere, and unique dishes made with locally sourced ingredients, be sure to make a reservation at Bokbacka — it’s pricey, but it’s worth it!  And don’t forget to come hungry.  The plates may be small, but there’s so many of them that by the end of the evening, you’ll be wishing you’d worn your “eatin’ pants” with the elastic waistband.