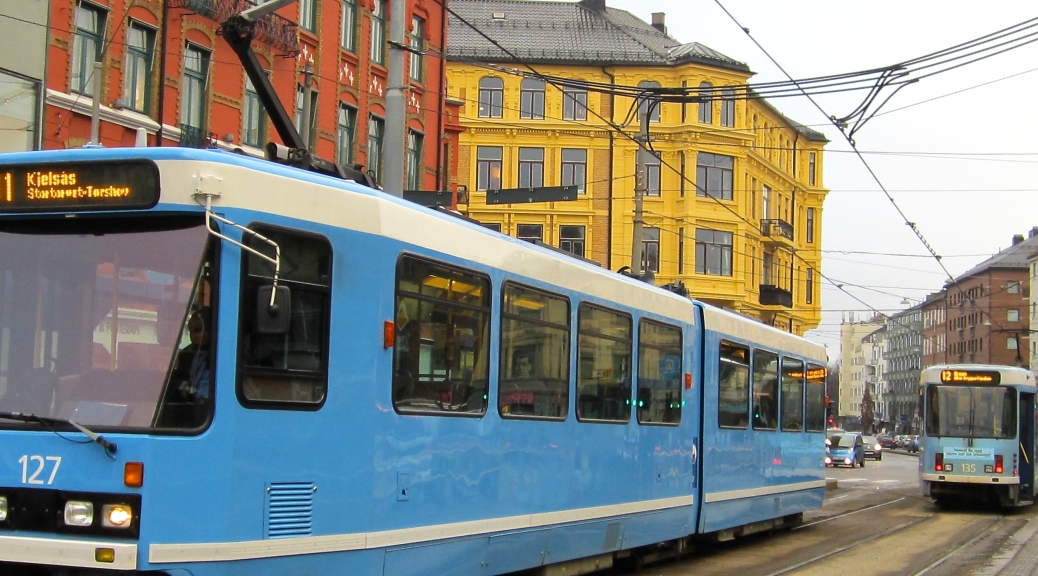 November 8, 2014.  Voyeurism saved my life during my first week in Oslo.  Adapting to a new job (construction), which was  quite different from my previous career (museums), made each day pretty doggone draining.  A real pick-me-up on the way home was staring out the windows of the Trikk (the electric tram above) and into neighboring homes to get a good look at Norwegian interior decor.  Most houses have enormous windows completely unfettered by curtains or blinds — light is a precious commodity in winter here and no one wants to block out the scant hours of sunshine — so like any Peeping Tom, I considered this amount of exposure to be an open invitation for gawking.

By the end of my first week, I’d learned that neo French-country fashion has made a perfect marriage with Scandinavian design and they’ve set up housekeeping in Norway.  Black or dark grey walls and weathered teak paneling are tres chic, Sputnik chandeliers swathed in tea-stained linen are de rigueur, and jazzy “primitive” objets d’art pair nicely with Mid-century Modern furniture.  The $15 Norwegian design magazines I bought confirmed my impressions and gave me inspiration for how I planned to personalize our new apartment.

With great anticipation, Matthew and I boarded our first “Ikea Bussen” in hopes of finding affordable, fashionable items with which to feather our nest.  Let me explain: while Olso is awash in fantastic interior design salons, most Norwegians try to save money by shopping for everyday home goods at Ikea (pronounced “ee-KAY-ah” here), which maintains cheap Swedish prices.  In fact, the “Ikea run” is such a staple social event that the company sends out enormous blue buses several times a day to ferry shoppers from the city to two satellite stores on the outskirts of town.

The atmosphere aboard the Ikea bus was surprisingly convivial for the generally reserved Norwegians.  Folks broke out their knitting, poured cups of hot java from their thermoses, shared sandwiches, and set about having a chatty coffee klatch during the half-hour ride.  Cushy seats and giant TV screens advertising the treasures that awaited shoppers intensified the lounge-like atmosphere.  I found myself questioning whether riding the Ikea bus all day might be a perfectly reasonable way to entertain myself the following weekend.

But the atmosphere changed as soon as we all entered the store.  Then it was every man for himself, and God help the person who got between a Norwegian and his bargain.  Trying to divide and conquer the items on our list individually resulted in neither Matthew nor I getting within reach of anything.  Within a half hour, we both experienced mild panic attacks and had to go in search of water.  A new teamwork strategy was needed.  One of us used the cart to block the desired row while the other grabbed the goods.  Gradually we checked off the list:  a guest bed and mattress, sheets, pillows, rugs, kitchen equipment, and so on … and on.

By mid afternoon, nourishment was a must.  We made our way to the Ikea cafe and stood in what appeared to be an endless Russian bread line.  But glory of glories, the food was worth it!  Rather than the ubiquitous Swedish meatballs found in a typical USA Ikea, this cafe served up an amazing menu that included items for every palate, from falafel sandwiches and filet mignon to baklava and crème brûlée.

Fortified, we rapidly finished our shopping and headed to the checkout line, where defensive maneuvers were again required as entire families tried to cut in line in front of us.  (Apparently Norwegians aren’t big on queueing.)  Final tally at checkout:  seven giant bags of Ikea housewares, plus a full bedroom set, collected in just under 5.5 hours.  We beat the office record!  (Matthew’s colleagues had warned us that on average, most of them had burned about six hours during their initial Ikea excursion.)

We rewarded ourselves with a swirly ice-cream cone and caught a cab home rather than wrestle seven bags onto the Ikea bus.  I can’t say that the 15 trips it took to bear our booty up the stairs were fun, but I sure am glad that we paid for delivery of the bed and mattress the next day — a big tip awaits those poor souls who have to climb our spiral stairs to the fifth floor.