March 8, 2018.  Well, it’s done.  Finally.  After five years of incredibly grueling work for our team (four for Matthew, three for me), our raison d’etre in Norway is complete.  We finished construction on the new American Embassy in Oslo last March, it officially opened for business last May, and we’ve just now put a period on the one-year warranty phase.  I’ve had to remain mostly mum about the project, for obvious reasons.  And though I still can’t say a lot, I’ve only recently gotten the  green light to show you a few approved photos of the place and fill you in on some details.  So anyway, here goes.

As expected, the Embassy opened with a big party — a ribbon-cutting ceremony held on June 15, 2017.  It began with the usual fanfare:  the Marine color-guard ushered in the American flag, followed by the singing of both countries’ anthems.  All of the Norwegians gustily joined in for a resounding rendition of Ja, Vi Elsker Dette Landet (Yes, We Love This Land.)  Embarrassingly, it seemed like only a handful of Americans knew the lyrics to The Star-Spangled Banner.  Maybe we’re just shy about our singing voices.  Or maybe no one wanted to attempt that really high note right at the end.  Yeah, that must be it.

Next, various government officials made their customary “nice job” speeches.  American Chargé d’affaires Jim DeHart kicked things off by welcoming guests and thanking the designer (EYP Architecture & Engineering) and builder (our company, Walsh Global) for their efforts.  Oslo’s Governing Mayor Raymond Johansen followed by offering rather guarded congratulations on the completion of a project that has clearly been quite controversial, the details of which he elaborated on at length in his comments.  Yep, some seat squirming ensued during his recitation.  Nobody really likes change, and the U.S. Embassy’s relocation to the suburbs has been a big one.

Foreign Minister Børge Brende tried to pave the way for more positive vibes by acknowledging the long history of mutual support between Norway and the U.S., and the importance of this continuing relationship, especially in regards to NATO, Arctic, and North Atlantic issues.  Too bad his comments were a bit overshadowed by the fact that, at the time of the ribbon-cutting ceremony, Norway had no American ambassador — a result of the mass State Department exodus after the presidential election and the new regime’s seeming disinterest in diplomacy.  (A running joke around Oslo is whether the embassy will eventually become a Trump hotel and casino.)

Speechmaking concluded with U.S. Overseas Building Operations (OBO) Director Ambassador William Moser, who spent quite a bit of time emphasizing how the new embassy embodies green design and construction, having achieved LEED Gold certification for its numerous sustainable elements.  The irony of his pride-filled comments when faced with the current administration’s persistent dismantling of environmental regulations was not lost on the attending crowd.  Yet another awkward moment.

The formal portion of the event wrapped up as the four speakers gathered together to officially inaugurate the Embassy by snipping the red-white-and-blue ribbon that draped its entrance.  Pomp and circumstance over, Jim DeHart invited guests to explore the grounds, tour the buildings, and partake of the meal offered in the new Embassy commissary.  Of course, everyone eagerly took him up on his offer — who doesn’t want free food, the chance to take a selfie with dignitaries, and an opportunity to snoop around a mysterious facility awash in conspiracy theories and besieged by neighborhood animosity, architectural criticisms, and bad press? 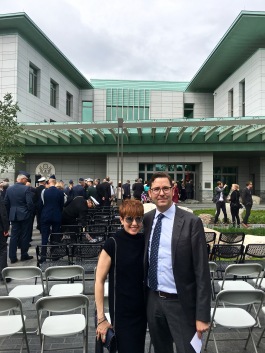 Behind Matthew and me, guests begin their tour of the new American Embassy.

Officers have removed their caps inside the new commissary and kitchen.

So why is the new American Embassy such a hot topic?  For starters, it’s located near a subdivision on the outskirts of Oslo.  Local residents aren’t too keen on the idea of having a “terrorist target,” as it’s been called, right next door.  I think you can imagine how nervous you might be in the same situation.  Add to that the mess and noise of construction — no matter how hard we’ve tried to ameliorate these nuisances — and you’ve got yourself some unhappy neighbors.

Inaccurate reports of the facility’s size and layout have also spawned some pretty wild rumors, from tales of enormous subterranean spaces for CIA interrogations (which have earned it the nickname “Guantanamo 2.0.”) to giant surveillance facilities and databases for spying on nearby residents.  It’s odd how anyone could believe such scuttlebutt, considering the site has been completely exposed both during construction and after opening, totally unscreened and out in the open for all to see — including Google Earth.  But the ribbon-cutting ceremony and upcoming events where neighbors can tour the place will hopefully quash suspicions.

The U.S. Embassy isn’t the only governmental installation in the neighborhood. The much larger King’s Guard Training Center sits just to the west.

To provide you with a few facts, the Embassy campus covers approximately 4 hectares (ten acres) and holds three small entry pavilions (consular, main, and service), plus a Chancery, Marine security guard residence, and an underground garage.  Altogether, the buildings cover only about 7,500 square meters (roughly 9,000 square yards) of the overall wooded site.  The chancery itself centralizes the offices of 200 U.S. government employees, which had previously been housed not only in the too-small old embassy but also in several other rented spaces scattered around Oslo.  The surrounding park retains features of the natural topography and landscape, such as a seasonal stream, a dense stand of mature trees, a grassy meadow, and rock outcroppings, while at the same time providing space for improved security, as a well as additional community parking and skiing, biking, and walking paths around the site. 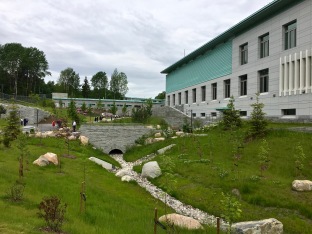 To the right is the Chancery, the main building. Alongside runs the seasonal stream, a restored riparian environment original to the partially forested site. The reinvigorated streambed manages stormwater runoff to conserve water.

An improved biking and walking path runs in front of the U.S. Embassy along Sørkedalsveien, which is situated within a five-minute walk to the T-bane (Metro train line). The Embassy has been criticized for the high perimeter fence that runs along the main roadway. (Hey, at least it’s not the chain-link razor-wire fence and earth berm that surrounds the King’s Guard facility.) The weird thing is that the fence here is nothing new; it’s identical to the one that surrounds the old embassy. But at least at the new embassy, the main entry pavilion is open and clear of fencing and you can approach the site unimpeded. At the old Embassy (nicknamed “The Fortress”), the entire site was encircled by the iron rails, studded with cameras, and watched over by a Norwegian mobile police trailer mounted on stilts across the street. Not nearly so inviting as the new Embassy campus.

Pictured is the Chancery entrance, surrounded by native birches, aspens, maples, conifers, wildflowers, and grasses that have been scattered among granite boulders. I think it’s kind of funny to compare the Embassy’s open fencing with the high wooden fence that completely hides the subdivision across the street. Their board fence existed long before the Embassy was erected.

Here, you can see the landscaped plaza in front of the Chancery. In the background is the service entry pavilion alongside an employee parking lot. Across the street is the Njårdhallen Sports Center, which has a public parking facility that has been enlarged and improved, along with new community sidewalks, as part of the Embassy project.

Architecturally speaking, the design has come under fire, which I find a bit surprising, as the architect aimed to reference both historic and modern Norwegian buildings, such as Akershus Fortress and Mortensrud Church.  To me, the Embassy has that “Mid-century Modern” flair, a style originally driven by Scandinavian designers.  Not to mention that its granite and copper cladding are common building materials all across Norway.  And, as mentioned earlier, the entire campus is about as environmentally sensitive as you can get, with a green roof, huge windows to maximize natural daylight for energy savings, and a ground-source heat exchange system that will allow the Embassy to meet nearly 100 percent of its heating load.  Oh well.  I guess some people just can’t be pleased.

The suspended roofline is made of copper — a nod to Norway’s contribution of the copper used to clad the Statue of Liberty. Norway was once the world’s largest producer of copper.

Matthew and coworker Dan stand on the terrace outside the commissary. The fins on the windows help to reduce summer heat gain and minimize the glare bouncing off of the snow in winter. But having lots of natural light plays a key role both in energy savings and in combatting SAD (seasonal affective disorder), which is common in Scandinavia.

So how has the whole experience panned out for us?  I’m not gonna lie, the project has been incredibly taxing for everyone involved — Americans and Norwegians, as well as the 47 other nationalities that have made up our team of more than 500 workers from multiple subcontractor companies.  Standard 60-hr workweeks that usually evolved into 80 -90 hours, multiple project changes, and frequent roadblocks haven’t been easy.  But in the end, our team can feel proud of the work they’ve done in helping to build a spiffy new U.S. diplomatic facility in Norway.

So what’s next for us?  Well, that’s a story for another day….