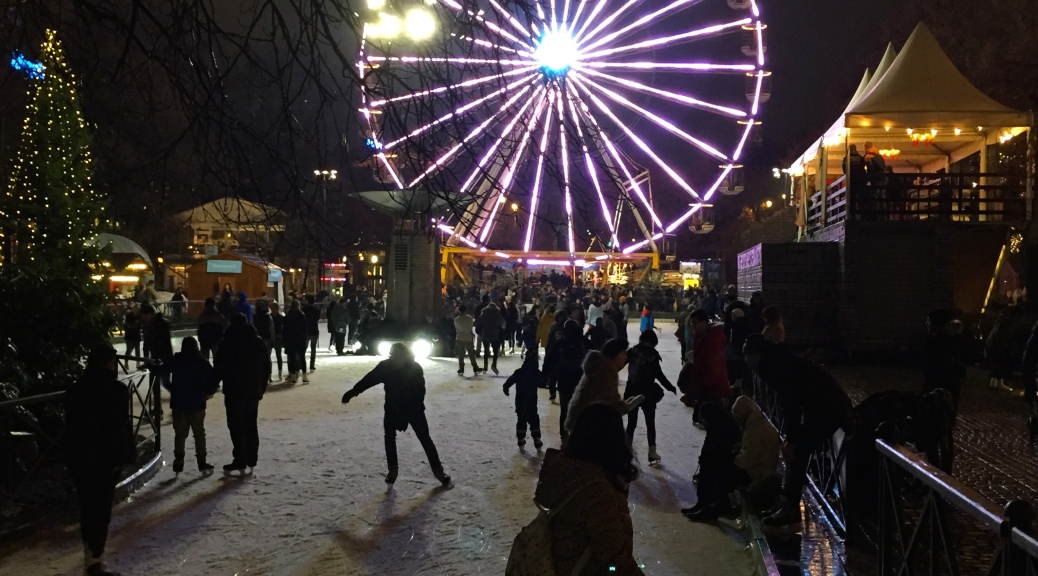 December 6, 2015.  Yep, it’s that time of year again.  Juletid.  (“Yuletide” to you and me.)  When white lights decorate the pine trees, real lanterns announce each entryway, and papers stars can be seen in most every window in Oslo.  The Spikersuppa Skating Rink and Julemarkeds open up along the main tourist drags, where American and Norwegian carols provide the soundtrack for skaters, shoppers, and diners.  Even the Trikk (streetcar) dons holiday finery.

Matthew waits for his turn on the Ferris wheel at Winterland on Karl Johan’s Gate.

Time for a little shopping at the Spikersuppa Julemarked on Karl Johan’s Gate. 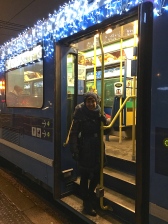 On Sundays, musicians dressed as Nisse (elves) lead sing-alongs for passengers on the Trikk.

A band in Oslo Central Station serenades travelers and tourists.

Mike (a friend visiting from the States) and I have some gluhwein by the fire at the Spikersuppa Julemarked.

Matthew jumps for joy at the Sami Julemarked near National Theater. 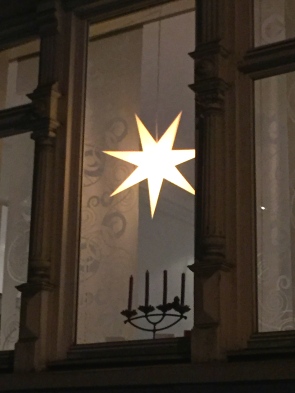 Moravian paper stars light up most Norwegian windows at Christmas.

I love the simple yet sophisticated holiday scene in Oslo, but two of my very favorite signs of the season are the posters that pop up reminding folks to A) don their reflective gear and B) monitor their alcohol intake.  You know the days are getting shorter and Christmas is just around the corner when you have to start worrying about getting hit by a bus in the dark or clobbered by a mean drunk on the streets. 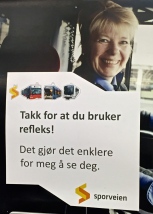 The train engineer says, “Thanks for wearing reflectors! It makes it easier for me to see you.” 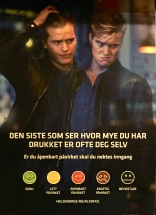 Clearly, this guy has gone from, “Confused Drunk,” to “Abusive Douchebag” in 60 seconds. Translated the poster says: “The last one to see how much you’ve been drinking is yourself. ” In fine print, it says: “You are obviously under the influence and should be refused entry.” You can use the smiley-face scale to judge your level of inebriation.

So I like how the guy in the previous poster turns into a scary, combative asshole when drunk, but the girl just gets weepy and her mascara runs.

Let’s tackle the first topic.  The Winter Solstice, or the beginning of the Mørketid (“Dark Time”), as the Norwegians say.  Right about now, we’re counting down the days to when there’s a scant six hours of daylight, compared to nine on our shortest day back home in Chicago.  And most of these daylight hours are so overcast that they could technically be labeled twilight.

Oddly, Norwegians don’t have a big blowout celebration on the shortest day of the year.  Instead, they commemorate the autumnal equinox in September.  Or as they call it, 12/12 day — the last day when there are equal hours of daylight and darkness.  All along a five-mile stretch of the Akerselva, the Riverwalk goes dark, and people fire up 3,500 torches to light the way for families as they parade past performers, artists, musicians, and dancers, all partying like pagans.

We took my mom to the event this year, and bless her heart, she hung in there, even though it rained so hard that most of the torches were extinguished.  We looked like drowned rats by the end of it, but we still got a chance to enjoy the funky art installations and listen to some of the choral groups huddling beneath the bridges for shelter.  The festival is definitely a nice way to “gird your loins” for the coming season of darkness. 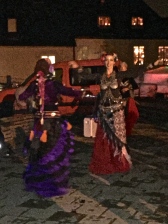 Belly dancers try to wriggle between the raindrops. 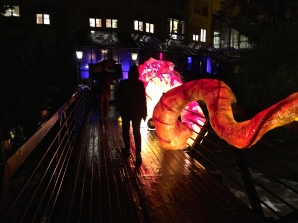 A Chinese Dragon has taken over the bridge.

Musicians try to stay dry beneath an overpass.

A choir of Norwegian sweaters occupies a tunnel.

Artwork glistens by the water’s edge.

After 12/12 day, things go downhill pretty fast.  Towards the middle of November, we start losing about a half-hour of daylight a week, and people’s spirits sink almost as rapidly as the sun.  By December, that yellow orb barely clears the horizon, hanging right at eye level so that when it does decide to burn through the cloud layer, it’s like having a retinal exam at the optometrist.

It’s at these times, when blinded by the light and unable to see where they’re going, that everyone turns into Norwegian sunflowers.  They park themselves on benches or curbs, close their eyes, and swivel their heads to mark the sun’s path, soaking up its last rays before the Mørketid arrives.  Then when darkness descends, the lanterns and candles come out.  Matthew and I recently passed by a lighting store and were shocked by how many chandeliers are equipped with both lightbulbs and candle holders.  Apparently nothing quite meets the winter need for palpable warmth like an open flame.

And if lanterns and candles aren’t enough of a seasonal cue, the ads for reflective clothing let you know the blackout of Christmas isn’t far away.  As I mentioned in my blog about the Mørketid last year, supposedly wearing reflectors is legislated.  This year, Mardou & Dean, a Norwegian designer label, launched an entire line of reflective clothing and held a sidewalk runway show to proclaim how fashionable shiny streetwear can be.  Maybe so, but folks look a bit ghostly and space age to me, like the spirits of Christmas Future. 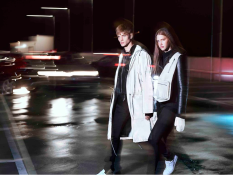 These Mardou & Dean Ads for their “Reflektiv Collection” graced most every train and bus stop. 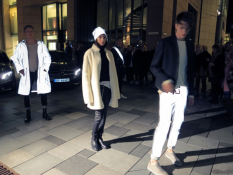 Check out the fashion show for “The Collection That Saves Lives.”

Last year when we first moved here, I honestly thought people were a little nuts to be so rabid about reflectors.  Then recently one night, while I was walking along a main thoroughfare with zero streetlights, I realized it’s unbelievably, abysmally dark here.  So dark that I almost got hit three times by cars that couldn’t see where the street ended and the sidewalk began.

I was shaking by the time I reached my destination, whereupon I proceeded to adorn each of my appendages with the reflective snapbands available for free in a basket by the door.  Now I’m a maniac, shrieking at Matthew every morning, “Don’t forget to put on your snapbands!!!”  After a few close calls himself, he has finally agreed to get a manly reflective wool scarf made by Morild of Norway.

We met the owner of the company at an art fair, and he asked about how he could get Americans interested in the concept of reflective clothing.  Matthew and I suggested that more northerly places like Alaska and Canada would be a good place to start, and also perhaps rural areas in states like North Dakota, where light pollution doesn’t white out the night.

He looked at us a bit puzzled, as I don’t think he’d considered that latitude and population density can cancel out this problem.  After all, Scandinavians deal with practically perpetual darkness for several months a year.  I’m not quite sure whether they realize it isn’t an issue in most other countries, especially those with huge urban centers and suburban sprawl, where an overabundance of street lights, headlights, backlit billboards, jumbotrons, and uber-bright skyscrapers means most residents never experience true darkness.

This brings us to topic number 2: imbibing in too many holiday spirits to deal with the winter paranoia brought on by all that darkness.  At this time of year, you can’t go to a restaurant without witnessing an office Julbord (Christmas table), where drinking is mandatory.  Most companies invite all their employees for an evening of fancy clothes, fine food, singing, and of course, toasting with aquavit.

I’ve had the good stuff — small-batch brews that taste of caraway and molasses.  But the run-of-the-mill aquavit typically downed during holiday toasts will singe off your eyebrows.  And remember: Norwegians love to toast.  A lot.  Needless to say, getting rip-roaring drunk in a matter of minutes isn’t difficult to do at a Julbord.

Hence the annual Christmas reminders to measure your alcohol intake.  These get plastered at every bus stop and train platform, and along the walls of the Trikk.  My favorite is the one that lists all the euphemisms for being drunk, which include things like, “in Narnia,” and “Van Gogh-drunk.”  The signs even post a scale to help you judge your level of intoxication, from smiley-faced sober, to lightly/obviously/heavily influenced, to exed-out-eyes unconcious.

So this Christmas,  if you’ve imbibed in a few too many spirits of the season, take some tips from the poster and try telling folks you’re an amøba (an amoeba), or a festbrems (a party pooper), or sveiseblind (welding blind.)  I’m sure they’ll be impressed by your ability to speak Norwegian while drunk.

2 thoughts on “Spirits of the Season”