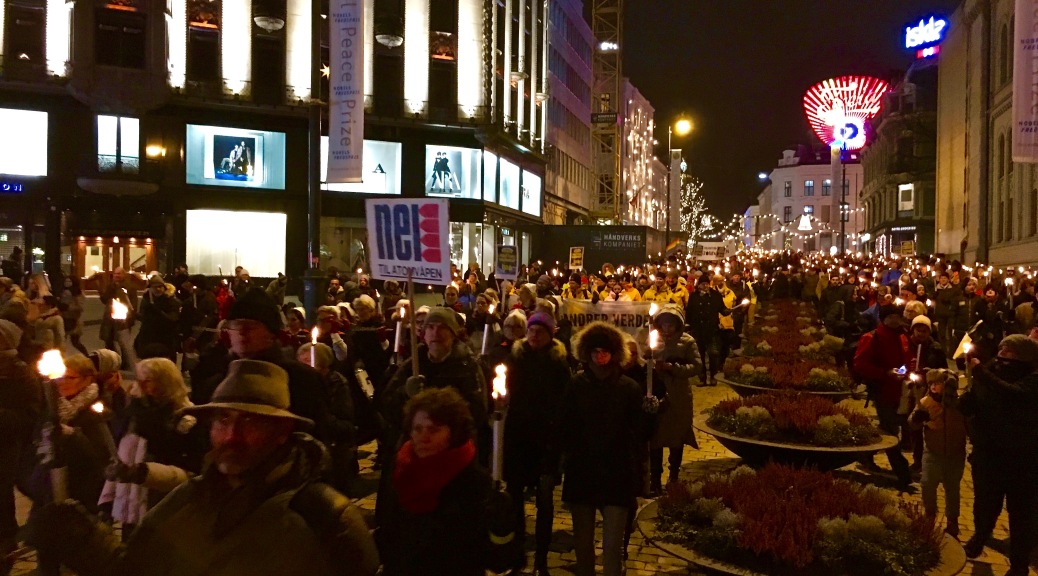 December 10, 2017.  Much time has passed since I first began this post about the Peace Prize.  With Nick’s illness, our family’s Christmas visit, and several big changes in our lives (details to come later), I just never had time to finish it.  The topic seems especially relevant now, however, given all the recent headlines of nuclear threats worldwide.  And so, I’ll continue my belated holiday story ….

At its core, Christmas embodies a message of hope and “Peace on Earth” for the future.  It’s a particularly fitting time of year to award the Nobel Peace Prize, an event that Matthew and I look forward to every winter here in Oslo.  And this year’s winner, an organization intent on abolishing nuclear weapons, couldn’t be more appropriate.

But I’m getting a little ahead of myself.   Let me back up for a minute with the historical backstory.  Ironically, the Peace Prize was conceived and funded by Alfred C. Nobel, a Swedish armament manufacturer and the inventor of dynamite.  Yes, many speculate that the “Merchant of Death,” as he was nicknamed, carried quite a bit of guilt for how he accumulated his millions.

Perhaps as his own personal form of atonement, he willed his fortune to funding five Nobel Prizes, including one for peace, to be distributed each year on the anniversary of his death, December 10th.  Interestingly, Nobel stipulated that the Peace Prize was to be awarded in Norway, rather than in his more militaristic homeland of Sweden, because the Norwegian parliament had become a leader in resolving global conflicts through mediation and arbitration rather than by force.

To that end, Nobel stipulated that the Norwegian parliament should appoint a five-member committee to award the Peace Prize to the person or entity that, in the preceding year, “shall have done the most or the best work for fraternity between nations, for the abolition or reduction of standing armies, and for the holding and promotion of peace congresses.”  And in 2017, that entity was ICAN, the International Campaign to Abolish Nuclear Weapons.

For those of you haven’t heard of it, ICAN is made up of hundreds of partnering civil organizations in over 100 countries, who have worked together to draft the Treaty on the Prohibition of Nuclear Weapons.  Together, they focus on spreading the word about the humanitarian costs of these devices — their catastrophic health and environmental consequences, which are indiscriminate and long term.  Check out ICAN’s video “Nuclear Weapons Are Not Someone Else’s Problem” for an introduction to their mission, and be prepared for a few disturbing images.

ICAN’s goal is to politically stigmatize nuclear weapons as a catalyst for eliminating them.  In other words, ICAN wants to apply peer pressure and public shame at a global level to nations who still play power games using the threat of deploying doomsday devices.  Think this concept sounds a little naive?  Maybe, but just remember the success of the International Campaign to Ban Landmines, which to date has resulted in 157 countries destroying their stockpiles.

So what effect has ICAN had so far?  On July 7, 2017, ICAN spokesperson Setsuko Thurlow presented the Treaty on the Prohibition of Nuclear Weapons at a meeting of the UN General Assembly.  (To see a moving depiction of her speech, check out the video “If You Love This Planet.”)  That day, two-thirds of the world’s nations signed the Treaty — the first  legally binding international agreement to comprehensively prohibit nuclear weapons.  But I bet you can guess who the holdouts were.  Yep, the cast of characters currently populating our headlines today.

And about that cast.  I’ll be honest with you.  Europe is scared.  I’m scared.  At this point, we have a number of world dictators (oops, I mean “presidents”) who clearly suffer from an intense sense of insecurity and inadequacy, a frighteningly short emotional fuse, and a deep need for worldwide recognition as the ultimate superpower.  The idea that one of these chest-thumping, silver-backed gorillas might throw a tantrum and push the launch button on nuclear war should scare everyone.

In response to Kim Jong-un’s New Year’s Day speech claiming that “the Nuclear Button is on his desk at all times,” Trump taunted his rival about the size of his … nuclear arsenal. He tweeted the equivalent of a nose-thumb, bragging that “I too have a Nuclear Button, but it is a much bigger & more powerful one than his!” I’m just waiting for the boys to unzip their flies and pull out a ruler. A phallic competition would be a helluva lot less dangerous than competing over nuclear capabilities.

Then in February, Trump threatened via another schoolboy Tweet that if Russia didn’t stop modernizing its nuclear force, “we’re going to be so far ahead of everybody else in nuclear like you’ve never seen before.” Not to be outdone, Putin then upped the ante by bragging about new “invincible” cruise missiles with unlimited range, and then demonstrated their capability in a video showing a nuclear attack on Florida, Trump’s favorite playpen. And the playground antics continue as the nuclear arms race gains speed. If this childish grandstanding doesn’t stop, someone’s going to get hurt, and it will be us, the innocent bystanders. Photo clip from CNN.

If you’re interested in knowing what it’s like to be on the receiving end of a nuke, take a few minutes to watch a video of the Nobel Peace Prize Award Ceremony in Oslo’s City Hall, and fast forward to 1:09:01 for Setsuko Thurlow’s speech.  A 13-year-old survivor of the Hiroshima bombing, she was just a little over one mile (1.8 kilometers) from the center of the blast.  Eight of her family members and 351 of her schoolmates and teachers perished that day.

Listening to her speak, I had a sudden recollection from my own childhood, a memory that I’ve tried to suppress over the years.  I was 12 years old, near Setsuko’s age, when my Social Studies teacher taught the lesson on the bombing of Japan.  She explained that it was deemed a necessary evil in order to end the war early and thereby save lives.  And then she showed us a film taken immediately after the bombing ….

I sat horrified by images of charred skeletons and molten bodies stacked in smoldering piles.  The walking dead wandered the streets, their skin sloughing off, the pattern of their vaporized clothes branded into their flesh like tattoos.  Near ground zero, the shadows of people who’d been walking on the street were burned into the concrete.  I still can’t get one visual out of my mind:  a young girl, whose lips had been melted away, exposing teeth, gums, and jaws fused together in an unholy mass.

I went home sick that afternoon, unable to stop crying.  It was days before I could attend school again.  I remember talking to my grandfather about it.  He’d served as a U.S. Navy signalman in the Pacific arena and had barely survived the sinking of three different ships he’d been assigned to.  He’d never had a night’s sleep without screaming himself awake from nightmares induced by post-traumatic stress disorder.  But in his mind, nothing he’d endured justified the fate suffered by the Japanese.

The worst part is, the bombs dropped on Hiroshima and Nagasaki were the gifts that just kept on giving.  Around 100,000 people were killed outright.  Over the next several months, the death toll rose to a quarter-million — more still die today from the lingering effects of radiation.  But let me just clarify something.  These were fission-based bombs.  Today’s nuclear weapons are fusion-based, up to 500 times more powerful.  (See this LiveScience article for perspective.)

As Setsuko Thurlow says, “These weapons are not a necessary evil; they are the ultimate evil.  Every second of every day, nuclear weapons endanger everyone we love and everything we hold dear.”  Her words kept spinning around in my head as Matthew and I joined the Peace Prize March the evening after the award ceremony.   And clearly, nuclear anxiety occupied the minds of many Oslo residents, because the crowd of 4,000+ was intense and somber, as if a mushroom cloud loomed overhead.

Various musicians and speakers addressed the masses and began the chant of “ICAN, We Can, Ban the Bomb” as everyone lit their torches and began the solemn processional.  A drum chore made up of female nurses and rescue workers kept time for the march and reminded us all that the impetus for ICAN came out of the International Physicians for the Prevention of Nuclear War (IPPNW), who themselves won the Nobel Peace Prize in 1985.

We all slowly made our way the half mile from Oslo Central Station to the Grand Hotel, where the winners of the Peace Prize traditionally greet the crowd.  Within minutes of our arrival, the balcony doors opened and Setsuko Thurlow and Beatrice Fihn, the Director of ICAN, stepped out to wave to the throngs gathered below.  Cheers and whistling gradually turned to chants of, “Yes ICAN,” then “Ban the Bomb,” ending the event by softly singing Bob Seger’s “We Shall Overcome/We Shall Live in Peace.”  (See my video here.)

If you’re interested in helping to spread this message, take a look at the websites of ICAN and IPPNW.  You’ll see that one of the best ways to shut down the arms race is to shut down the cash supply.  Refuse to put your money in financial institutions that fund the production, maintenance, and modernization of nuclear weapons.  Check out Don’t Bank on the Bomb for a list of companies in your country who fund nuclear weaponry.  You have more power than you realize to bring about peace and a future free of nuclear nightmares.