December 20, 2015.   Looking for a little holiday pick-me-up — and an opportunity to get out of the house after our battles with pneumonia and sinus infections — Matthew and I decided to attend the Jul celebrations at Akershus Festning og Slott (Akershus Fortress and Castle).  The program promised a noon tour in English filled with the history of the site, as well as a demonstration of Norwegian Christmas traditions, so we braved the freezing cold for the chance to learn more about the huge Medieval structure that dominates Oslo’s harbor.

We’d wandered many times around the grounds of the fortress, which is surrounded by impressive-looking ramparts and bordered by an active military base, but we’d never had time to take a tour.  Frankly, I’d been told that there wasn’t much to look at; even Rick Steves downplays it as one of the more mediocre European castles.  However, maybe it was the festive holiday greenery, or perhaps it was the incredible collection of furniture and tapestries, but I have to say that I found Akershus to be beautifully mellow, warm, and inviting — a great place for a cozy, royal-family Christmas.

I couldn’t resist taking photographs of some of the gorgeous Biedermeier furniture strewn around the palace.

In truth, the tour was pretty light on telling tales of Norwegian Christmas traditions, so I just took notes from the visuals.

Another gorgeous cabinet. There were at least a dozen of them.

Our tour began in the blindingly bright castle church, which once formed the “summer rooms” for Queen Margrethe I (1353-1412).  The huge windows provided an awesome view of the harbor and let in so much light and warmth on such a blustery day that I’m surprised she didn’t use it for her winter rooms.  Converted into a sanctuary in the early 16th century, the chapel now serves as the head church for the Norwegian armed forces and is still used for Sunday services and military weddings.

The royal family holds their private funeral services here, too, with the caskets of kings or queens later being lowered into the Royal Mausoleum beneath the church.  Currently, two modern royal couples rest in the marble crypt, as well as three members of the Medieval royal family, including King Håkon V, who founded the castle, his queen (Eufemia of Rügen), and Sigurd the Crusader.

The Medieval kings and a queen were moved to Akershus from Medieval church ruins around Oslo.

Next, our guide took us through the east wing where a portion of the Medieval Daredevil Tower (the original Keep) can still be seen.  Here, our guide gave us an overview of the site’s history:  around 1299, King Håkon V began construction of the Castle Keep, which was enlarged and fortified over the years to withstand several sieges from Swedes, Danes, and the occasional rebel Norwegian.  In the late 1600s, King Christian IV (of Denmark) modernized it into the Renaissance royal residence and fortress complex that we see today.

Not such a bad-ass at Christmas time, this festive knight sits tucked in a portion of the remaining Daredevil Tower.

The grey cobbles in the center of the castle courtyard show where the remainder of Daredevil Tower (the original keep) was located. 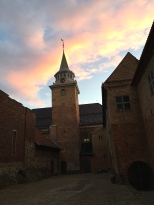 The castle courtyard in late afternoon, with a view of the Blue Tower.

The castle fell into disrepair until around the turn of the 20th century, when Norway won its independence from Sweden and, for the first time in about 400 years, reinstated an autonomous Norwegian King — who is actually Danish.  Long story short:  the Norwegian royal line died out after the Black Death claimed two-thirds of the nation’s population, at which point a series of Danish, then Swedish, rulers took over the throne.  When Norway’s “union” with Sweden was finally dissolved, what was the country supposed to do for a ruler?  Invite the King of Denmark’s younger son to take the throne, of course.  (At least one of the ancestral Danish Kings had a Norwegian wife, meaning the current royal line can still legitimately claim some Norwegian blood.)

So in 1905, Prince Carl of Denmark changed his name to King Håkon VII of Norway and brought his wife and son over to become the official Norwegian Royal Family.  In fact, King Hakon VII’s grandson, King Harald, celebrates his 25th year on the throne in 2016.  By the way, this changeling concept of rulership isn’t unique to Norway.  Sweden’s royal family is actually French.  When the last king died without heirs after the Napoleonic wars, Sweden invited one of Napoleon’s top generals to take on the role, and the Bernadotte royal line is still going strong today.

In any case, having a new Norwegian king kicked off a nationalistic fervor that resulted in Akershus being heavily researched and restored to represent various periods of habitation.  Many of the rooms have fun stories behind them:  there’s a dungeon that contains a cell known as the “Witch’s Pit.”  And there’s the Hall of Christian IV, which displays fabulous 17th-century Flemish tapestries that once belonged to the king and were somehow squirreled away on a remote Norwegian farm, only to be re-discovered in the 20th century.

The door to the dungeon and the “Witch’s Pit.” 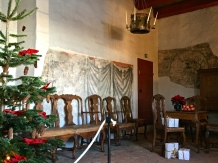 In several rooms, portions of the original Renaissance murals have been found intact.

From 1841-45 the poet Henrik Wergeland, then the National Archivist, occupied this office. He owed lots of money, so whenever debt collectors would show up, he’d have his pet adder (a poisonous snake that had had its venom sacks removed) crawl around the room to scare them away (look at the foot of the door.)

One of the “Bridal Tapestries” said to have decorated King Christian IV’s bedchamber on his wedding night. 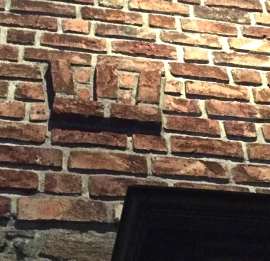 It’s said that during the restoration of the castle in the early 20th century, masons laid this brick crown in celebration of the birth of the first king born on Norwegian soil in 400 years. Apparently the architect wasn’t too happy with their creativity.

Another tale involves the Hall of Olav V, which occupies what was once the great hall of the Medieval castle.  It fell into ruins and was later controversially restored by an architect who modeled his designs on both English and Norwegian royal houses.  The rose window containing stained glass was designed by Emanuel Vigeland (sculptor Gustav’s brother).  During the Nazi occupation of Norway, Norwegian resistance fighters blew up one of Hitler’s flagships, the Selma, in Oslo’s harbor.  Unfortunately, the ship contained 400 tons of explosives, and the shockwave damaged several structures around the harbor and splintered the window.  A few remaining pieces were hidden and reinstalled after the war was over. 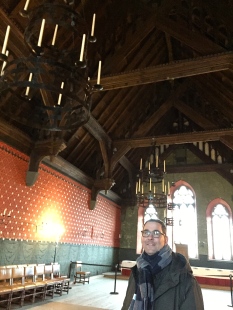 The somewhat fanciful recreation of the Hall of King Olav V. It’s unheated and quite chilly, which helps it feel authentically Medieval.

A few remaining portions of Emanuel Vigeland’s stained-glass windows can still be seen.

Perhaps the most poignant story comes from Romerike Hall, named after peasants who reputedly still haunt the place — with good reason.  As the story goes, farmers from the Romerike region experienced a poor harvest one year and couldn’t pay their taxes.  So the Governor of Norway (who ruled on behalf of the Danish King) rounded them up and forced them to rebuild a wing of the castle after a fire in 1527.  All died within a few months during the harsh Norwegian winter due to poor sanitation, little food, flimsy tent shelters, and other ungodly living conditions.  Beyond the obvious cruelty, it sure is a smart way to kill off your tax base.  But shortsighted officials are nothing new to history.

Brightening the dismal backstory of Romerike Hall this year was an enormous juletre (Christmas tree).  I’d heard from several Norwegians that Christmas Eve traditions always include joining hands to dance around the tree, however, I assumed I’d never get to witness the event firsthand.  (The holiday is considered quite private for immediate family only; outsiders are rarely invited.)  But fortunately, several folks had encircled the Romerike tree for a trial run.

They sang several songs, but I think my favorite was one that seemed to involve pantomiming all the steps necessary to get ready for Christmas, including sweeping and mopping the floors and trimming the tree.  (Reminded me a bit of “I’m Bringing Home My Baby Bumblebee,” for those of you who remember that preschool favorite.)  Can’t tell you how cute it was to see parents and siblings teaching the youngest members of the family all the words and steps to each dance.

Afterwards, Matthew and I headed to the dining hall for pepperkaker cookies, gluhwein, and a chance to warm up after the chilly tour through the dungeons and other unheated parts of the castle.  A bit giddy from the punch, and feeling inspired by the castle’s simple yet elegant decorations and traditions, we headed home to trim our our tree and get ready for the holiday.