Far over in Norway’s distant realm, 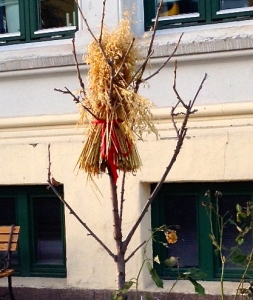 That land of ice and snow,
Where the winter nights are long and drear,
And the north winds fiercely blow,
From many a low-thatched cottage roof,
On Christmas eve, ’tis said,
A sheaf of grain (julenek) is hung on high,
To feed the birds o’erhead.

In years gone by, on Christmas eve,
When the day was nearly o’er,
Two desolate, starving birds flew past
A humble peasant’s door.
“Look! Look!” cried one, with joyful voice
And a piping tone of glee:
“In that sheaf there is plenteous food and cheer,
And the peasant had but three.
One he hath given to us for food,
And he hath but two for bread,
But he gave it with smiles and blessings,
‘For the Christ-child’s sake,’ he said.”