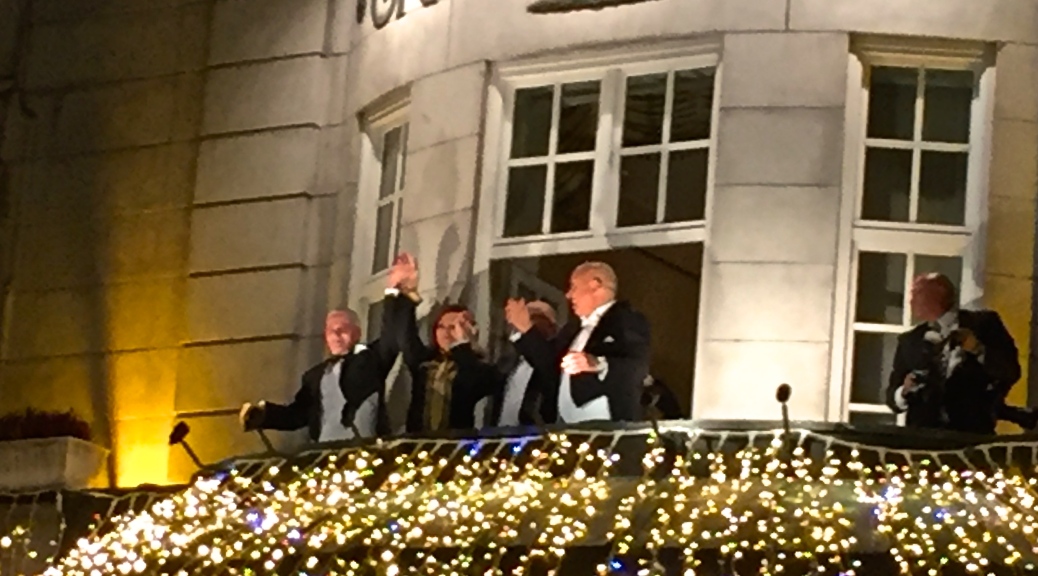 December 10, 2015.  For the last two years, I’ve been lucky enough to be present for the balcony appearance of the Nobel Peace Prize recipients.  Meaning that I’ve stood street-side with the crowd as the winners have waved from the second story of the Grand Hotel.  But because of timing and work schedules, I’ve never gotten to join the torch-bearers in the parade that winds from Central Station, down Karl Johan’s Gate, to the plaza.  Until this year….

Despite being feverish from an unrelenting sinus infection, I dragged myself out of bed, determined not to miss the Nobel festivities on what will probably be my last year here in Oslo.  I arrived at Jernbanetorget for the opening ceremony, purchased my giant wax-soaked torch, and then stood in the cold for a few minutes to listen to some of the local musicians perform, most of whom sang in English.

But when the speeches started in Norwegian, I began circulating through the ever-growing crowd to take photos and keep warm.  My wanderings brought me face-to-face with a truly bizarre anachronism:  a life-sized Tie Fighter from Star Wars, looking as if it had crashed and burned in the middle of the plaza.  Above it, a huge jumbotron flashed scenes of war, destruction, and death from the upcoming sequel.

I’m not sure who did the PR planning, but the juxtaposition between people parading for peace in the present and a vision of the future as a perpetually violent fight for freedom was pretty bone-jarring.  And the fact that the crowd was filled with Tunisians celebrating their countrymen and women’s win as Nobel Laureates this year — for their role in helping to stabilize their country and secure civil liberties after the Arab Spring — was particularly poignant.

For those of you who may not know, the 2015 Peace Prize was awarded to the National Dialogue Quartet “for its decisive contribution to the building of a pluralistic democracy in Tunisia in the wake of the Jasmine Revolution of 2011.”   To explain, after the revolution, which actually launched the Arab Spring, Tunisia was on the brink of civil war.  Radical Islamists were gaining in political power, forming a strong opposition to the existing authoritarian government.

To prevent anarchy, the Tunisian Labour Union and three other civic societies formed an alliance as the Quartet and drafted a roadmap for negotiations that was eventually signed by 21 parties from radical and non-radical camps.  Their efforts helped establish a democratic system that resulted in the peaceful resignation of the oppressive old regime, the ratification of a new constitution, and the election of a new president who champions technocracy —  a governmental system where those with technical knowledge, rather than political, religious, or business clout, become the decision makers, using the scientific process to solve the nation’s problems.

To help put the Quartet’s role in perspective, I’ll quote a few notables:

Standing next to flag-wrapped Tunisians singing their national anthem and making the Arabic ululation that we’ve come to associate with joy and pride, I felt honored to be a witness to the occasion.  Especially after so many other horrifying events have shaped such negative perceptions of Muslims and people of Arabic descent.

It can be incredibly difficult after experiencing tragedy to avoid fear, prejudice, and intolerance.  Most of us forget that many Muslims have suffered equally from the effects of extremism, and that extremists in every religion squash personal freedoms and deal in death and violence.  I’m humbled by the opportunity to celebrate the triumph of democracy alongside those who’ve endured more than I can ever imagine to experience liberty.

Lighting my torch, I joined the short processional to the Grand Hotel, where after a brief wait, the leaders of the National Dialogue Quartet stepped onto the terrace.  Thunderous applause, cheering, and more singing greeted them, but then a hush fell over the crowd as the Norwegian musician Kygo took to the stage below and began performing his song “Firestone.”  With all of us standing there holding flames in honor of the Tunisian visionaries and the desire to spread peace worldwide, the words could not have been more fitting:

I’m a flame
You’re a fire
I’m the dark in need of light
When we touch, you inspire
Feel the change in me tonight
So take me up, take me higher
There’s a world not far from here
We can dance in desire
Or we can burn in love tonight

I’m from X, you’re from Y
Perfect strangers in the night
Here we are, come together
To the world we’ll testify