February 22, 2015.  Our 7:00 a.m. wakeup call for dogsledding day came like a kick to the head, considering our extended flight of beers from the night before.  After consuming enough coffee to feel human again, we caught the van to the dogsledding facility.  On the way, we passed through more Arctic watercolor landscapes awash in haloed sunlight.  Wisconsin-style barns and little red cabins perched on the edges of steaming fjords.  Looking a bit like beached whale skeletons, fish-drying racks sat empty, waiting for cod-fishing season to start.  I think I took about 50 photos just on the way to the dog yard (see the gallery at the bottom).

Upon our arrival at the facility, we donned polar gear that smelled faintly of wet dog and made our way out to the yard where 300 yipping, howling furballs greeted us.  Each was chained to a little “doggie duplex” that they shared with a partner.  Plaques emblazoned with names like Ajax and Bjørn (“Bear”) proclaimed their gender via color-coding, “red for girls, black for boys” announced our guide, Martine.

While we petted muzzles and cooed to the various cuties, Martine explained that we’d meet four kinds of sled dogs today: Huskies, Samoyeds, Malamuts, and Greenlands.  “They’re all bred for pulling, and they love it,” he assured us.  “You’ll find out as you drive the sled.  They’ll look back at you when you brake, as if to say: ‘What’s your problem?'” But before we could drive, we needed lessons, so Martine divided us into two groups.  While the first went for their training session, we remained behind to get the story on dog-sledding.

Martine revealed that the owner of the place was the first woman to own a such a facility, and that she kept her own racing pack of 40 dogs separate from the main yard.  He explained that the regular touring dogs run every other day, about 15 kilometers (a little over 9 miles) per day, but a true pack used for hauling typically runs twice that in a day.  Each dog is capable of pulling around 100 kg (220 lbs) individually, so when you harness six dogs together, they can haul a sled carrying 600 kg (1,320 lbs).

Martine then went on to share some fun facts about dogsledding:  for example, the first man to reach the South Pole — Norwegian Roald Amundsen — started his Antarctic endeavor with 97 dogs and ended with only 14 (some were eaten.)  According to Martine, Mongolians who’d immigrated to the Arctic were the first to employ dogsleds more than 3,000 years ago.  And did you know that the Iditarod race has its origins in the rush to relay diptheria serum from Nenana to Nome, Alaska, during an outbreak?

He went on to explain a little of the training for dogs.  “The leaders are usually the females,” he said, “males want to pull, not think.  They like to just run and follow the guy in front, rather than listen to directions from the driver.  Maybe, not so different from human males, hmm?”  He also said that drivers typically don’t harness brothers and sisters together, although siblings may occasionally share the same food bowl and doghouse.  “It’s like family.  They’re fine over dinner, but by dessert and coffee, they’re fighting,” he joked.  “And when we harness relatives, they often argue:  ‘Hey, you’re not pulling hard enough; I’m carrying the load.'”

Martine also reassured us that the 300+ pack are divided into groups of 35-40 dogs that are each assigned to a trainer who checks on the health and happiness of every dog every day.  “These dogs are the trainers’ babies,” he explained.  “They teach them how to pull as youngsters and are the ones to drive them and see how they’re feeling or acting each day.  If a dog becomes aggressive or unsociable, the trainers will pull it aside and work with it privately to find out what’s wrong.  The trainer know the dog’s language.”

At about that moment, all the dogs began a chorus of howling and yowling.  “They’re announcing the return of their friends,” Martine explained.  And sure enough, the first group came gliding over the hill and around the bend, yipping a greeting in return.  We exchanged places with the other group and stood two-by-two at each sled as Martine gave us basic instructions.  “Gee means ‘go right’ and Haw means ‘go left,’ but really each pack will follow the sled in front of it.  To help the sled turn, you just need to stand on the left or right runner, whichever direction you want to go.”

“Braking is the hardest thing,” he said, “because the dogs just don’t like to stop.”  The trainer of our team then showed us how to slow down by standing on the soft brake, which resembled a little rubber doormat dragging between the runners.  “You can also use the emergency brake if the dogs ignore you,” Martine explained, as the trainer pointed below to what looked like a fanged shopping cart handle located at ankle level.  “Stand on it, and it bites into the snow to tell the dogs you really mean it this time.”

“Then you also have the parking brakes,” he quipped.  Our trainer showed us what appeared to be two giant fishhooks or anchors.  “Throw these out before you get off the sled, because as soon as your weight is gone, the dogs will start running again.”  I was reminded of a colleague who’d forgotten this lesson and stepped off the sled while his wife was still aboard.  He said he ran like hell to catch the thing, and fortunately his wife never knew what happened.

Thoroughly intimidated by the driving instructions, I volunteered to be the passenger on the first run.  As the trainer zipped me into my plastic bubble, I asked her whether sleds overturned often.  “All the time,” she said.  “Sometimes more than once.”  That had me rethinking my decision, and I reminded Matthew that his precious cargo would not appreciate another face plant so shortly after the infamous ice fall:  “No pressure or anything, just don’t dump me,” I cautioned.  With force.

So with a “Yah,” the teams took off, and within a few minutes I realized that riding on a dogsled was considerably more uncomfortable than riding in a reindeer sleigh.  For starters, sled dogs apparently poop while they run, so getting hit in the face with the smell, or worse yet, dirty snow, was quite a surprise.  And with nothing but a thin piece of wood between my butt and the rough, rocky terrain, I felt every mogul with bone-jarring bruising.  To top it off, riding low along the ground at a rapid rate triggered my motion sickness, so that when the time came for drivers and passengers to switch places, I was more  than ready to give driving a try.

Turns out, the ride for the driver is much smoother, since you get to use your legs as shock absorbers.  Plus you can enjoy the view a lot better, not having to stare only at dogs’ rear ends or vegetation whizzing by.  And as a form of exercise, it’s actually quite a workout.  Between gripping the handlebar to avoid falling off, shifting your weight between the runners to turn, leaning away from the turns to prevent tipping, and applying the various brakes constantly to keep the sled from running over the top of your dogs, you’re practically breathless from exertion.

As intense as it was to drive the sled, I have to say that it was incredibly thrilling, and I’d do it again in a heartbeat.  Better yet, neither Matthew nor I overturned our sled, and our trainer complemented us on our skills.  We pulled into the dog yard feeling like we could conquer the world and gave our furry team lots of cuddles in return for their efforts.  But the fun wasn’t over yet.  After a lovely lunch in what looked like a wooden version of a Sami tent, we were taken to the “nursery” for a chance to meet a momma sled dog and her pups — all nine of them!

The momma nervously but patiently waited while we all took turns snuggling her brood and getting our photos taken with them.  Cutest things you can imagine.  Their fur smelled of warm hay, and with each sleepy yawn, they breathed sweet milk breath into my face.  They looked so comfy nestled in their little box that I felt like curling up with them, more than ready to doze after all the excitement of the day.  But the Northern Lights awaited, and so we headed back to the hotel for a nap before our next adventure. 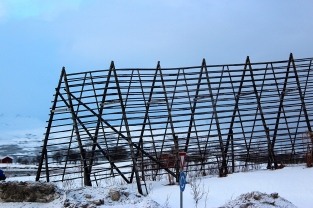 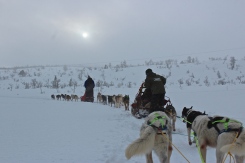 Look at those blue eyes.

Drinking from a wooden cup at lunchtime.