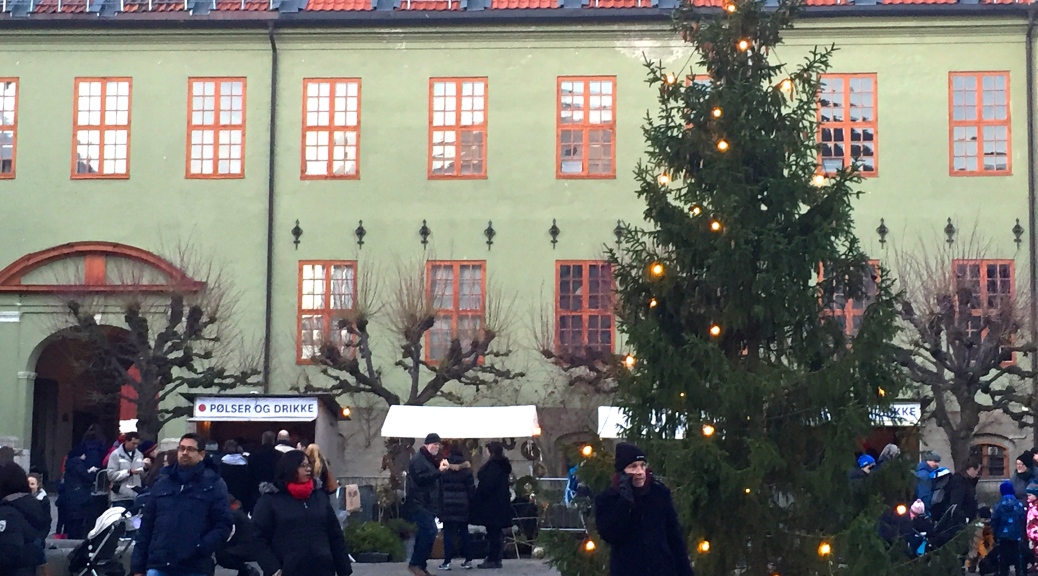 December 12, 2015.  My very favorite Christmas activity in Olso is the Julemarked at the Norsk Folkemuseum (the Norwegian Folk Museum).  Not only do you get to walk through ancient and incredibly adorable log-cabin homes from all over Norway, but you can watch folk dances, eat traditional holiday foods, attend a Christmas service in a 12th-century Medieval Stave Church, learn about local Jul customs, ride in a horse-drawn sleigh, and shop more than 100 stalls filled with hand-made woolens, antiques, toys, and decorations.

Wheels, not runners, for the snowless day. 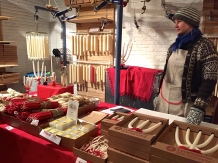 The candlemaker has been hard at work. The 3- and 5-branched candelabra supposedly symbolize the Trinity, or the number of family members in a home, depending upon who you ask.

Holly and Julenek (bundles of wheat) for sale.

Tradition says that if you place a Julenek in front of your house and draw a circle in the snow around it, the sparrows will dance below it on Christmas Eve.

I’ve got my candle and Julenek, so I’m set.

A Sami lavvu (tent) provides a spot to warm up.

Saffron buns and other holiday goodies.

Icicles hanging from the eves of a traditional home glisten in the sunlight.

Matthew and I suited up for the bitter cold this year, although we were a bit disappointed that the frigid temperature hadn’t brought a load of snow with it.  We knew this meant the sleighs would be mounted on wheels and that the houses would be bereft of their cotton-white coatings — basically, we feared the whole experience would have less Julestemning (pronounced Yool-shtem-ning.)  It’s my new favorite Norwegian word, meaning “Christmas Spirit” or “Christmas atmosphere.”

But when we arrived at the museum, it was to discover that hoary frost had coated every available surface.  Now for those of you who haven’t seen hoary frost, it’s simply amazing.  Rather than the flat sparkly stuff that covers the ground in a thin film, hoary frost takes on incredibly intricate 3D fractal patterns that build up so thickly they command their own air space.

My grandfather had told me stories about it, but I first saw hoary frost at our family farm in Kentucky on Christmas morning a few months after he’d passed away, and ever since I’ve associated it with a sort of Yuletide blessing from beyond.  Seeing it covering the ground here in Norway always makes me feel like maybe Gramps gets to travel vicariously through me, so I scampered around taking photos of the heavenly confections before they melted away in the sunlight.

Hoary frost coats the ground all around this dapper Norwegian.

Check out how the crystals have grown on these leaves.

Frost on a hunk of moss.

Eventually the freezing cold called for a hot drink, so we meandered over to one of the bonfires and grabbed ourselves a mug of coffee.  Not your ordinary java, the stuff gets poured out over a pine branch stuck into the spout of the coffeepot.  The fragrant, resiny brew is like drinking Christmas in a cup.  We parked ourselves on a hay bale that was covered with reindeer hides and sheepskin and warmed our bones for a bit before heading to the folk-dancing arena.

Kids and parents cluster around the bonfires for warmth and hot java. 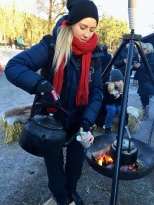 A branch of pine provides a Christmasy flavor.

Christmas in a cup.

Truly, there’s nothing more heartwarming that watching adorable kids dressed in traditional bunad (costumes) perform folk dances for their cheering, hollering, hooting families.  Some of these tykes are so tiny I’m surprised they can walk, much less dance.  Each sports a red cap and red-painted cheeks, just like the nisse (elves) that accompany the Julenisse (the Norwegian version of Santa) on Christmas.

A single fiddler provided the music, with the Julenisse occasionally taking part in the dancing when he wasn’t eating his porridge.

Dance steps included “swing your partner,” the traditional “slap-your-partner” — an old favorite found in many folk dances — and some Cossack-styled acrobatics that included handstands and springing up into the air to kick a hat off a wooden pole.

Little ones dressed as nisse.

…then sneaking up on him to scare him and running away when he started smacking at them with the spoon.

Next to the folk-dancing arena sits a paved area that, if freezing drizzle cooperates, serves as a make-shift skating rink for children.  Bundled in plastic bunny boots and the onesie snowsuits that all Norwegians force their offspring to wear, the kids look just Ralphie’s little brother from “A Christmas Story.”  It’s hard not to wince at their repeated falls, but the thick padding ensures no tears, just laughter.

Red cherry mustaches also tattoo most of the little ones, a result of the candied apples that are a favorite treat this time of year.  But the funniest thing is watching the number of kids who smack their apples on the moss-coated ground in an attempt to break them into smaller pieces — and then chow down on the now furry remaining bits.  Other kids just skip the apple and go right for sucking on chunks of the algae-green ice.  No big reaction from the parents.  Remember, what doesn’t kill you makes you stronger.

We eventually made our way to the stave church, relocated from Gol to the folk museum by King Oscar II in the late 1880s.  It originally dates to around the early 1200s and is one of only 29 remaining original stave churches in Europe, 28 of which are in Norway.  (Learn more about these unbelievable structures in my Stegastein and Stave Churches post.)  I’d always wanted to attend one of the Christmas services held here, but this was the first year we’d been able to make it.

The Lutheran pastor unlocked the doors and we all filed in for a closer look.  As he changed into his vestments and lit the candles, about 20 of us prowled around, taking photos of the gorgeous altar paintings that include the Last Supper and the four Gospels.   (This is only the third time I’ve been inside, since the church is open just during the summer on busy weekends.)

The service began with everyone singing in Norwegian the Christmas carol that I know in English as “Oh, how a Rose ere Blooming.”  Then the pastor began his message, his breath coming in visible puffs backlit against the candlelight in the freezing cold church.  Although I only understood a few words, I still felt the spirit of Christmas Past creeping over me.  The ancient timbers overhead creaked in the frigid wind as we all stood huddled together for warmth in the unheated sanctuary, just as churchgoers would have done in Medieval times.

The pastor closed the ceremony with what I recognized by the cadences to be the Apostles Creed and the Lord’s Prayer, and then everyone sang another familiar tune that I could hum along with.  To me, this is the best part of religion — when no matter your language or culture, you can all come together to participate in age-old familiar rituals that reinforce a sense of community and commonality, despite personal differences.

Just as in Medieval times, everyone stood for the service. The bench seating around the walls was reserved for the elderly.

The apse of the church. On the interior of the apse is where the Last Supper painting is displayed.

The Last Supper painting dates to the 1600s.

The dark interior, as in Medieval times, was lit only by candles.

Look at the size of those planks in the ancient floor.

We exited the church after receiving the pastor’s blessing and, in hopes of a warm fire, aimed for the nearest log-cabin home that had smoke pouring from its chimney.  Inside, a couple dressed in bunad offered us a seat by the fire and cups of steaming mutton stew.  A square, stone-lined pit held burning logs over which a bubbling cauldron was suspended via an enormous horse-necked beam.

Our hostess showed us how she could adjust the cooking process by swinging the loudly groaning and protesting beam to and fro above the fire pit.  Her actions stirred up the birchbark smoke, which smelled like incense but stung our eyes and made us cough a bit.  She pointed to the hole in the ceiling and noted that this was the only means of ventilation in these ancient log cabins.  Lung ailments must’ve been big back then.

Our host then shared some traditional holiday practices, which included mandatory beer brewing and drinking heavily from Santa Lucia’s Day to Christmas Day.  No big surprise there.  These customs all relate back to the Viking solstice celebration called Jul (Yule), that involved drinking until you blacked out, or the sun noticeably changed its course in the sky, whichever came first.  More unusual was the superstition that a supernatural processional of trolls, demons, and the ghosts of evildoers called the Oskorei, all led by a broom-riding witch named Lussi, flew through the skies to claim souls on Christmas Eve.  For this reason, all Norwegians hid their brooms, painted sooty crosses above their doors, kept the hearth fire and candles burning all night, and refused to venture outside after dark.

The Halloween-come-Christmas traditions continued with the belief that the spirits of ancestors came by the house that same evening in search of a decent meal and a nap.  A loving family would put out food and then sleep in a pile of straw on the floor so that the souls of long-dead grandma and grandpa could rest in a real bed for a change, rather than in a coffin.  Isn’t that thoughtful?

So as we near that same sacred evening in just a few days, let’s all give thanks that the worst traditions we’ll face are having to chew Aunt Laura’s rock-hard fruitcake or endure the snoring of five additional family members sleeping under our roof for the holidays.  And a God Jul (“Good Christmas”) to all!