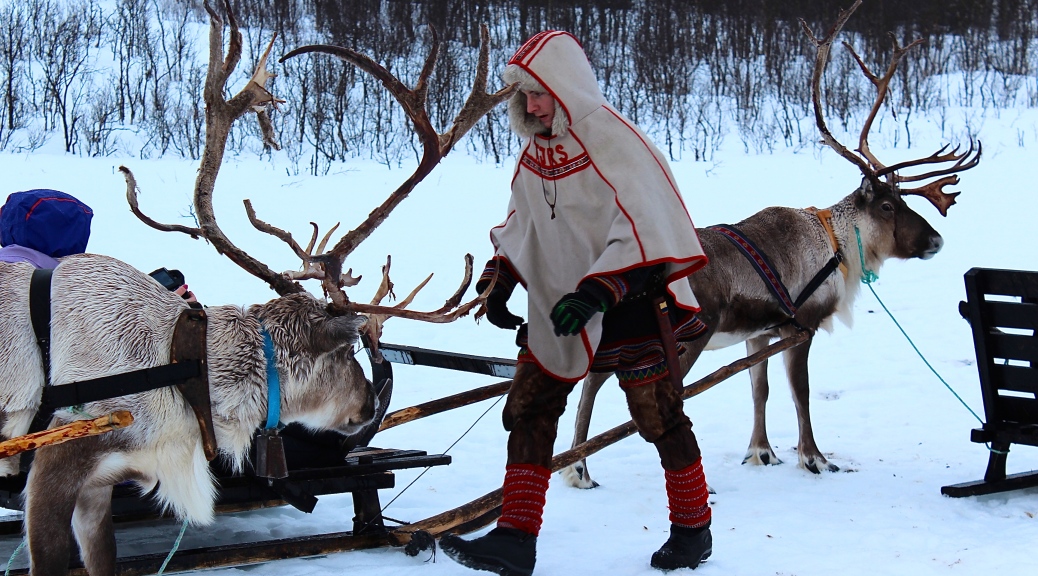 February 21, 2015.  When we asked our colleagues about Norway’s most “can’t miss” moment, they all advised:  “Take a trip to Tromsø for reindeer sleighing, dogsledding, and Northern Lights.” (Oh my!)  So we packed our bags for a long weekend and headed off to the Arctic Circle.  Called the capital of the Arctic, Tromsø is a Norwegian island that sits only about 1,400 miles from the North Pole.  Surprisingly cosmopolitan, the city claims to have the world’s northernmost zoo, botanical garden, hospital, cathedral, commercial brewery, and Burger King, just to name a few.

Of course, upon our arrival in the middle of a snowstorm, we decided to test Tromsø’s urban flair and see what they had to offer in terms of vittles.  Miracle of miracles, we were able to get a seat at the highly-rated Bardus Bistro, where we sat down to enjoy our first taste of reindeer flank steak (really flavorful and tender) and crispy cod tongue (sounds gross, but it was deliciously sweet and light), along with several other yummies.  We washed it all down with Haakon, a fantastic lager brewed by Mack of the “northernmost brewery” fame, and then headed back to our hotel for some shut-eye before our early morning reindeer ride with Tromsø Lapland Experiences.

The next day, we met up with our host, Tor, who greeted us wearing Sami “dress formals:”  beautiful reindeer-hide leggings, a felted and hooded wool cape, and a colorfully embroidered, skirted shirt — but more about Sami clothing and customs later.  Tor drove our group of 12 through the misty and remarkably beautiful countryside to two Sami lavvus (tents shaped like Plains Native American tipis).  Here we were provided with giant, puffy polar suits (“onesies” to you and me) to put on over our winter clothes for extra warmth, as the day promised to be snowy and cold.

Properly suited, we waddled like penguins back to the van for another short ride to the pasture where the reindeer were waiting.  I’d seen reindeer at the zoo, but I’d never really realized how short they were.  Their heads reached only to my shoulder, and their legs looked surprisingly spindly underneath their thick, furry bodies.  Some of them brandished racks of branching antlers so large that I can’t imagine how they managed to see around them.  But my favorite thing was their little furry feet with splayed toes that seemed to grab the snow by the fistfuls and toss it into the air behind them as they walked.

Each reindeer was hitched to its own wooden, two-person sleigh — as it turns out, Santa’s feat of having eight skittish reindeer pull one sleigh was as magical as having them fly.  Taming them to work together as a team is nigh impossible.  While half our group went on the first ride, Matthew and I stayed behind with the second group for a lesson on reindeer herding.  Another guide, Ken, explained that the Sami people are indigenous to “Lapland” (northern Norway, Sweden, Finland, and Russia), and nomadic reindeer herding is their traditional way of life.  About ten percent of Sami today still herd reindeer for meat and fur.

Ken went on to tell his own personal story:  when he was nine-months old, his godfather died and left him his herd of 5,000 reindeer, a fairly decent-sized inheritance by Sami standards, although his cousin has more than 20,000 reindeer.  He said his cousin uses helicopters to herd the group, but many Sami rely mostly on snowmobiles with dogs riding shotgun and barking to manage the crowd.  Clearly, reindeer herding is fairly lucrative, although Ken testified to the bitter cold, exhausting work, and months of lonely isolation keeping the herd on the move foraging for food.

At some point, one of our group asked Ken why he wasn’t wearing Sami clothing.  With a gut-punched expression, he explained that he had a formal outfit, made for him by his grandmother, but it had been stolen from the trunk of his car the night before.  “It’s probably on Ebay now,” he tried to joke.  I asked if it were recognizable, and he said yes, each design reflects the village as well as the family of a person, but he said stuff like that sells so quickly to people who fence for collectors that there’s almost no way to track and find them.  Yeah, people really suck sometimes.

Just then, the first group arrived back at camp, and soon it was our turn to climb onto the traditional Sami sleigh — really more of a glorified sled with a bench back.  Tor tucked us in and introduced us to our reindeer, a tall rangy boy whose antlers had to be sawn off because “he likes to fight too much with his friends.”  The lead-line of our reindeer was tied to the back of the sled in front, and so on and so on, until we had a caravan of five sleighs hitched together, with Tor at the helm driving a gorgeous white buck in possession of a truly impressive rack.

We took off with a slight jerk, and as if on cue, snowflakes as big as goose-feathers began to fall, muffling sound.  Only the ringing cowbell on the lead reindeer and the clickety clack of the herd’s hooves penetrated the silence.  The smell of ozone and distant birch campfires filled our nostrils, making us sleepy as our sleigh slithered and skittered through the snow.  Not necessarily the smoothest ride in the world, the sleigh had no springs, so we felt each dip and bump in the rocky landscape.  But what it lacked in comfort it more than made up for in charm, and I can’t recommend it enough as the most peaceful way to enjoy the Arctic landscape.

After about a half-hour journey, we returned to camp, where Ken uncoupled the reindeer from their sleighs and tied them to a grazing line.  We were given large bales of “reindeer moss” — actually a kind of arctic lichen — to feed the reindeer, who gobbled it greedily.  I gotta say, getting close to their mouths without accidentally getting knocked over by their antlers was a logistical conundrum, but the reindeer were surprisingly docile.  Tor told us that it takes about five years to tame a reindeer and train it to pull a sleigh because they’re naturally nervous wild animals and are easily spooked.

After feeding our reindeer and thanking him for the lift, we boarded the van back to the lavvu for a meal of — you guessed it — reindeer stew.  Can’t say I didn’t feel like I was betraying my reindeer buddy by eating his relatives, but I tried to remind myself that I was helping to sustain a way of living more than 3,500 years old.  As an archaeologist and historian by training, I feel pretty strongly that preserving unique cultural heritage is a valuable goal, especially in this day and age when American pop culture is obliterating everything in its path.  But enough of my soapbox (and assuaging my guilt over my meal).

“No one wears modern clothing while working,” he said.  “It just won’t keep you warm and dry like reindeer hide does.”

While we finished our dessert and coffee, Tor pulled out his working clothes, passed them around for us to examine, and gave us a bit more history on reindeer herding and Sami culture.  His winter wear consisted of pants made only from the skin of reindeer legs, which is more supple and allows for better movement.  An enormous hide coat that covered him from neck to knee belled out around his body, creating an air pocket that acts like a personal tent, allowing him to sit nice and toasty inside.

Gauntlet-like mittens kept his fingers warm, while the shoes possessed pointy toes and long laces so that they can easily strap onto a pair of cross-country skis.  Rather than wearing socks, which stay wet, Sami people stuff their shoes with dry grass that wicks moisture away.  Tor told us that all of these items are handmade of reindeer hide — fully hand-stitched — and are far warmer than North Face, Marmot, or any of today’s brands of polar wear.  “No one wears modern clothing while working,” he said.  “It just won’t keep you warm and dry like reindeer hide does.”

Next, he pulled out an elaborately etched and painted box.  “I inherited this from my uncle, and it contains things I’ll use in my wedding someday,” Tor explain.  He passed around each item and detailed its use.  “I’ll take off my belt with square silver medallions and put on this belt with round medallions during the ceremony to indicate I’m now married.  Women do the same thing, switching from a square brooch to a round one.”

He then went on to describe the traditional marriage proposal, which involves the young man first applying to the girl’s father for permission privately.  If his suit is accepted, he then returns with his entire family (aunts, uncles, cousins included), each in their own reindeer-drawn sleigh to indicate the family’s wealth.  Then if the bride is agreeable to the match, she gives them permission to enter the household.  Everyone goes inside and the groom’s women-folk make a huge dinner for both families using the ingredients that they brought with them.

The weddings can be enormous: “My cousin had 3,000 at his wedding — usually the whole village is invited,” Tor said.  Of course, the next logical question was when Tor was getting married.  He replied that he had a girlfriend and was considering marriage, but while he wanted to go about things the traditional way, “she wants to elope to Las Vegas.”  Aargh — ubiquitous American culture strikes again!

But back to Sami weddings.  At a reception, it’s traditional for everyone to sing Yoiks.  Not exactly a song, it may be made up of syllables, a series of sounds, and prose and poetry that almost resemble a yodel.  Tor explained that everyone has a Yoik invented for them at their birth.  Some may have more Yoiks created for them during important moments in their lives, if they achieve something special.  Tor and another guide then demonstrated how one person starts the Yoik, and others join in and may continue it when the first person drops out.  To me it sounded almost like some of the Native American chants I’ve heard.  The sad part is, the singing of Yoiks was prohibited for about 150 years, due to Christianity’s interpretation that it was satanic, and apparently some church groups are still working to get Yoiking outlawed.

One last great story Tor shared concerned his great grandfather.  As the tale goes, during Canada’s gold rush, the miners took to poaching the local game, leaving the Inuit / First Nation’s people to starve.  As part of the Manitoba Project, Sami people were brought in to teach the native peoples to herd reindeer.  On Christmas Eve, Tor’s great-grandfather and the other Sami dressed in their “wedding best” — brightly colored gakti (skirted jackets) and pointy felt hats — and took packages of reindeer meat door to door.  Their outfits caught on, and Coca Cola came out a few years later with illustrations showing Santa and his elves, who looked suspiciously like Sami.