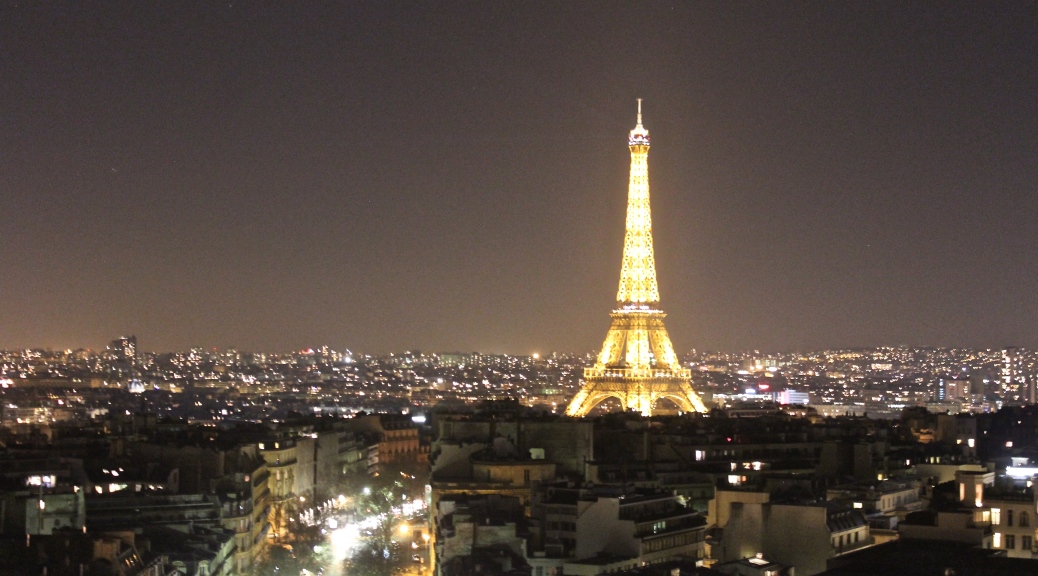 March 15, 2015.  Okay, so my niece isn’t so little now — she’s 20 and about five inches taller than I am — but she’ll always be my baby.  Since she was 12 years old, she has come to visit us for almost every fall and spring break, as well as Christmas and in the summertime.  It has been pretty rough since we’ve moved to Norway, because the time difference makes it really hard for us to talk much.  So this year I was particularly excited to have her come hang out with us in Norway for her college spring break.

The plan was that while we were back in Chicago for a brief conference, she’d fly up and then join us on the trip back to Oslo.  But as a little surprise, we decided to stop in Paris for a brief layover.  (She and I have both studied French, and we’ve often dreamed of traveling there together.)  Matthew and I explained the ticket destination initially as a plane change, and then when we arrived, we sprung the news on her that we’d be staying over for two days — during Paris Fashion Week.  Much gasping, and “OMG’s” ensued.

While we waited for the models to wake up and strut their stuff on the sidewalks of Paris, we decided to tour the Catacombs.  (I’ve been to Paris several times, but I’d been saving this particular excursion to tackle with my niece, since we both have a fascination with the macabre.)  An hour-long line — surprisingly short compared to predicted wait times — eventually brought us to an unassuming entrance housing a spiral staircase that wound 60 feet down to the crypt.  Carved above the entry portal, the cheery welcome, “Arrête! C’est ici l’empire de la mort!” (“Halt!  This is the empire of the dead.”) greeted us upon our arrival.

A mile-long walk led us along eerily dripping but fairly well-lit boulevards lined with decoratively assembled bones, elaborate carvings made by quarrymen, and more jaunty epitaphs, such as “Happy is he who is forever faced with the hour of his death and prepares himself for the end of every day.”  Skulls, femurs, backbones, and other recognizable body parts had been fashioned into graceful arches, romantic hearts, Christian crosses, beer-keg columns, and other architectural details by the workers of Vicomte de Thury, the man charged with turning the place into a visitor destination back in 1810. 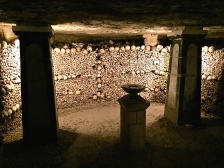 Crypt of the Sepulchral Lamp.

A quarryman who’d been imprisoned opposite the Port Mahon Palace on Menorca carved this copy from memory between 1777 and 1782. 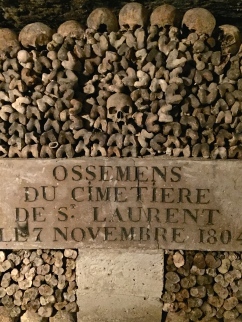 The bones come from the old decommissioned cemeteries in Paris.

Originally rock quarries, the mines were turned into catacombs in 1786. 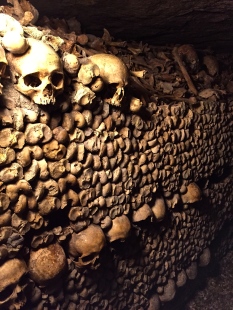 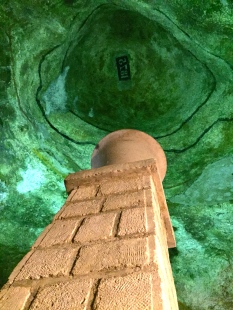 After getting our fill of the gory, we opted to cruise the Latin Quarter for the requisite croissant-and-café-au-lait experience at a Parisian corner café, then we strolled down the Champs-Élysées to catch some Paris fashion.  Lots of shopping ended in a quick dinner and trip up the Arc de Triomphe for a fantastic view of the city and the Eiffel Tower at night.  Jet lag finally called us to bed, and we awoke the next morning still bleary-eyed, but willing to cram in as many sites as possible with our remaining day.

“Thrilled” to be on the Champs-Élysées.

The Champs-Élysées at night.

View from the top of the Arc de Triomphe.

First stop:  Notre Dame, of course.  As we waited in a long line for a chance to climb up the bell towers, a musician with trumpet in hand wandered out onto his balcony overhanging the street and entertained the crowd with one of Handel’s trumpet flourishes.  Typical for Paris.  Finally making it to the rooftop, we wandered through the gallery of gargoyles and experienced our own Quasimoto moment when the passing of the hour triggered a deafening but still awesome concerto of bells. 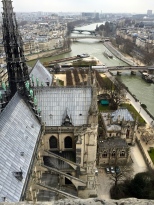 A view of the Seine from Notre Dame. 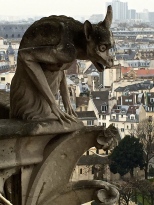 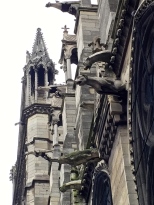 A view of the gargoyle downspouts.

Serenaded by a trumpeter outside Notre Dame. 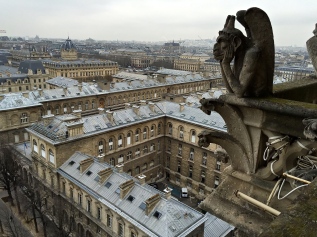 This where he goes to think.

A tour of the nearby Sainte-Chappelle gave us a chance to contemplate the gorgeous Gothic architecture and traditional stories told in stained glass. 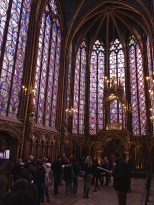 The “jeweled lantern” of Paris. 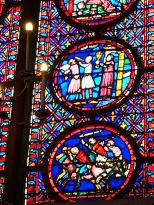 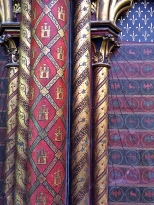 The paint job is a restoration from the 19th century.

McKenna contemplates the chapel, which was built in between 1242 and 1248 for the only French king to become a saint, Louis IX.

And a quick Metro ride shuttled us back to the Tuileries, where we parked ourselves on a bench in the Musée de l’Orangerie and watched the light change, shifting Monet’s Nymphéas (Water Lilies) through myriad moods and seasons.  At the Louvre, we came face-to-face with such notables as the Mona Lisa, Winged Victory, and the Venus de Milo, but I think the highlight for McKenna was probably our brush with a famed designer. 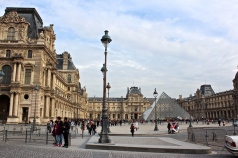 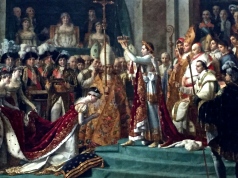 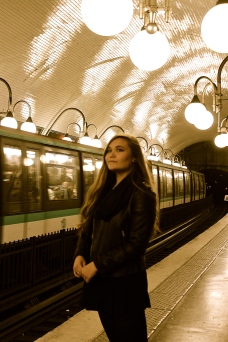 We’re imitating the Rodin sculptures, in case you can’t tell.

While walking back through the Tuileries, we stopped to peer into some of the tents erected to feature shows and displays by various designers and fashion houses.  At one point, we spied two coiffed and coutured women tweaking the train of a model wearing a lacy confection of a wedding gown.  A small crowd had gathered, and one of the admirers screamed out, “We love you, Monique!”

I elbowed my niece, who at her age had no reason to know much about famous wedding dress designers, and explained, “That’s Monique L’huillier!”  McKenna quickly Snapchatted some photos, which to her joy were automatically geotagged and branded with “Paris Fashion Week,” and then she posted the image on her Instagram account.  A few hours later, she was thrilled to discover that Monique had tagged her back, responding: “Love your photo!”

Monique and an assistant adjust the train. 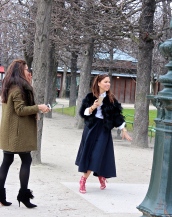 And after that triumph, we sashayed over for a fabulous dinner of escargot penne for McKenna (she’s a pretty adventurous eater), rabbit for me, and duck for Matthew at our favorite place in Paris — Chez Janou, which features provencal cuisine and about 75 kinds of Pastis.  Not to be missed!  The evening ended with a quick visit to the Eiffel Tower, where we staged our own fashion photo shoot complete with McKenna modeling her Fashion Week frock from H&M. 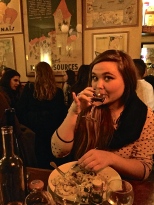 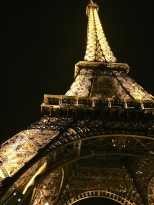 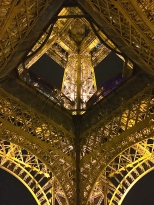 The center of the structure. 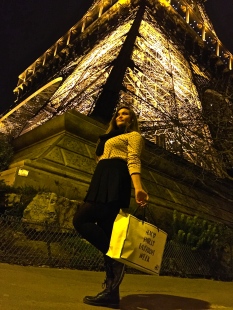 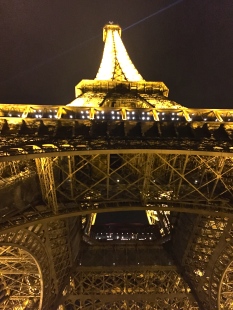 More views from below.

The next day, we headed back to Oslo and spent the week taking my usual tour of Oslo’s highlights:  Vigeland’s Park, Frognerseteren Restaurant, the Viking Ships Museum, the Norwegian Folk Museum, the National Gallery, Akershus Fortress, and a cruise around the harbor — can’t say I didn’t show her the sights!  But the best part was just getting time to hang out and catch up on life, with hopes that the future will bring us another chance for a European vacay together.  Miss you, McKenna! 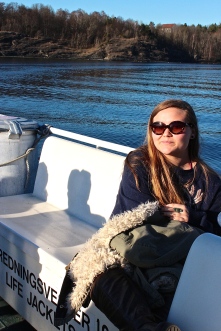 On the Oslo fjord ferry. 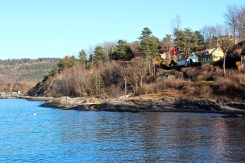 One of the small islands in Oslo’s fjord. 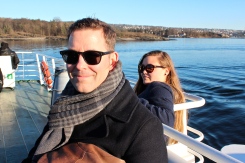 Basking in the rare sunlight.